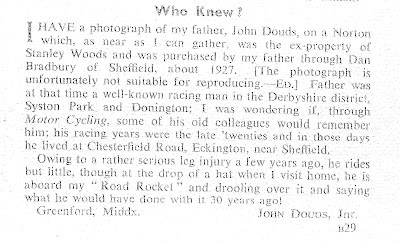 -SG- Here's a copy letter from MotorCycling of 31 October 1957: what is so irksome is that the Editor considered Mr Douds' photo as not being suitable for reproduction in the magazine! I have made a couple of feeble attempts to trace Mr Douds but without success. Does anyone know anything about him - or his machine? The bike is unlikely to have been the TT winning machine from 1926 but might perhaps have been the Model 18 Stanley Woods used in the Scott Trial.
Newer Post Older Post Home