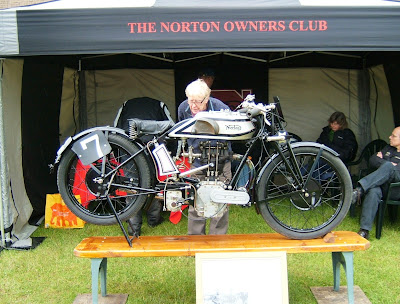 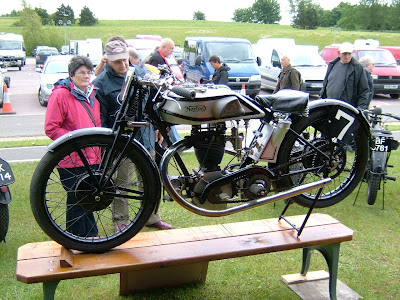 -SG- Earlier in the month, the VMCC’s Annual Banbury Run took place and the Norton Owners Club stand had an interesting selection of Vintage Nortons on display. Pride of place was given to the Model 25 Replica OX1619 which has been mentioned briefly before - (Follow this link and this one) - and which I last saw a bit over twelve years back. It is certainly a very presentable machine but it is not a Model 25 neither is it a Works 1926 machine, and despite the descriptive placard, has  - as far as I can tell - no links with Jimmy Shaw. Indeed, the photo on the placard appears on page 29 of Davison’s book ‘The Story of the Ulster’ and this does not show the number plate clearly even though the first two letters - OX - can just be deciphered. 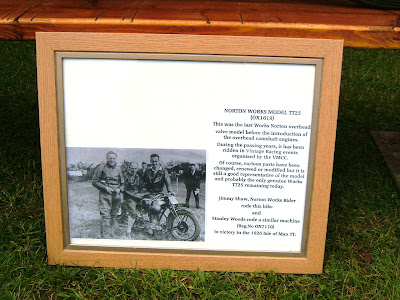 So what’s amiss with it as it stands? The frame has no number and in any case is standard Model 18; it lacks the wrap round magneto rod mounting on the front down tube. The drive side crankcase number 30801 comes from a Model 18 supplied in June 1926 to Wigan dealers A Rudd. The timing side crankcase is indeed Model 25 or Model 21. The LS gearbox end cover is a CS1/ES2 version with the top extension cut off. The gear change fitted is specifically intended for use with the CS gearbox used by Nortons and others from about 1920 to 1928 inclusive; it simply will not function in conjunction with an LS gearbox due to change lever dimensional differences. The pannier petrol tanks are indeed correct for the 1926 works bikes and a few were later supplied to special order fitted to production Model 25s. The oil tank also appears to be correct although fitted with the wrong size of filler cap. Minor points but worth mentioning, the magneto and carburettor are both incorrect, the rear tyre is the wrong size (20 inch) if it is pretending to be one of the works bikes, and the rear brake lever mechanism is incorrect!

Apart from pointing out a few things which seem to be wrong with OX1619 as it now exists, the machine with this number seems to have started life as a very interesting and rather special bike. It almost certainly started life as a racing spec. Model 19 with TT forks, pannier tanks, dry sump engine number 35589, Binks TT Carb. and frame number 28586. This was despatched in December 1927, as ‘second hand’ to the Coventry Motor Mart - a company with which Nortons had a very good relationship and to which other used works bikes were sold in the vintage years. Incidentally the existing V5 shows date of original registration as August 1927.

I do not have any record of the buyer or of what happened to the machine in the intervening years up to around 1950 but at this stage it was acquired by the late Derek Pickering of Coventry - still in 588cc guise.  However, during his ownership, the frame was changed for a standard 1928 Model 18 unit with number 33440 and crude lugs were brazed to the rear down tube to accept the TT style oil tank. Derek found that the 588cc engine would not fit into the model 18 frame, so without more ado he cut out the lower tank rail entirely and substituted a suitable length of tube with a 90 degree bend each end which he anchored into the sidecar lugs, thus missing the 588 valve gear! In this form it was raced in the Silverstone Saturday meetings organised by ‘Motor Cycling’ in the early fifties. What caused Derek to abandon the original frame is not known but it seems to have disappeared entirely. At some point later in the fifties, the 588cc engine self destructed and was replaced by a Vintage Model 18 unit and in this form it was sold to a chap in Kingston on Thames. Which - for those with enough stamina to have read this far - is where I came into the saga!

In 1959 the owner in Kingston responded to my ‘wanted’ advert for Vintage Norton parts and offered me the complete bike  (fitted with standard Webbs not TT type) plus some spares for £25, adding somewhat optimistically that he understood the bike was connected in some way to Stanley Woods - on account of the pannier tanks and a similar yarn spun to him by Derek Pickering! So I became the owner of OX1619 in what we may call its first re-incarnation.

At the time I was making tentative steps in the field of Vintage racing, using my 1930 Model 18 so without more ado I fitted the earlier engine from OX1619 and also robbed it of its 8” Enfield front brake. The hacked about flat tank frame and TT tanks were set aside for future consideration!

Over the next three or four years I obtained a dry sump engine - never discovered if it was Model 21 or 25 - another Model 18 flat tank frame and various other parts. I sold the lot for a modest sum to the Connelly brothers in Brighton in 1966 and, as far as I know, they built the machine in its present form - re-incarnation number two!  However, in registering its details with the VMCC they used the log book information rather than the actual engine and frame numbers (or lack of frame number!).  In due course it became part of the Autokraft collection at Brooklands, which was auctioned off when the company ran into financial problems in the late nineties and the bike became the property of the present owner for £10750 plus usual premiums, which raised a few eyebrows at the time! Rather a lot to pay for a replica.....

And the hacked about  1928 Model 18 frame which formed part of OX1619 when I bought it? I swapped it with the late Stan Johnson for some Norton pistons and after a few intervening owners and frame repairs, it has been restored as a tidy flat tank Model 18.
Newer Post Older Post Home