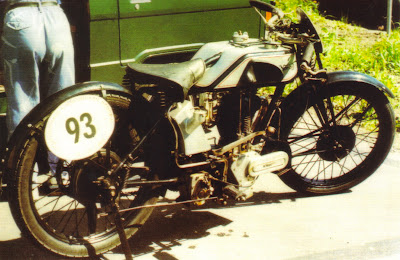 -SG- This (above and feature before) looks like a reasonable recreation - done in Germany -  although the oil tank is a bit weird.  Photo taken in the mid eighties. 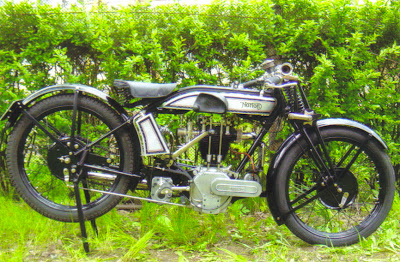 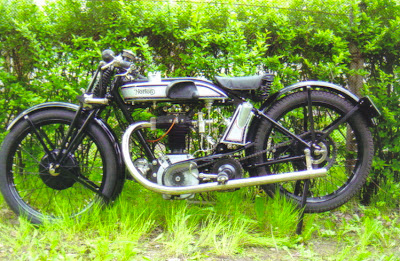 Above, a high class re-build by my good friend Juris Ramba in Latvia, which I have had the pleasure of riding a few years back. No oil pump pedal and initially, the rear brake set up was slightly odd as the rear brake arm was pushed rather than pulled when the pedal was operated. I understand this has been rectified now. With replica IT cams in it and correct B and B Sports carb., it goes like the clappers! 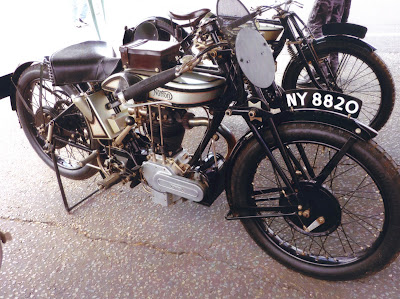 And above... a recent photo from Alf of a Model 25 which has appeared at various shows.  From what I have been told of it's provenance it is a replica but again, pretty good. The engine number appears to be correct for a Model 25. LS boxes, if fitted, seem usually to have been racing versions rather than kick start versions, as fitted to this bike. 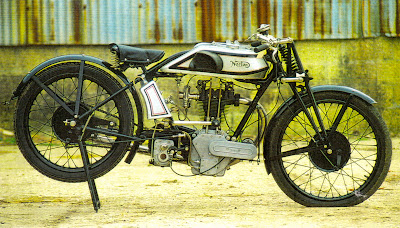 And above... Auction catalogue photo from about 1998 of OX1619 - a machine I once owned (or to be strictly accurate, I owned a machine with this registration number and these tanks - too long and boring a story to go into here). It is located quite close to me but there are problems with running it because it has the wrong gear change fitted for the LS gearbox currently installed. Rear brake set-up is also wrong though it doubtless works!
Newer Post Older Post Home