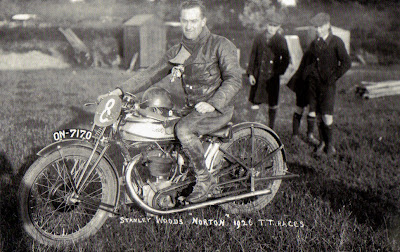 In 1926 Stanley Woods rode for Nortons for the first time and his mount for the Senior TT was a dry sump OHV machine fitted with pannier tanks.  As mentioned in the earlier blog, this was a development of the 1925 TT bikes, with various changes to both the engine and the cycle parts.  Stanley has recounted how well the bike went in practise – until a conrod breakage wrecked the engine.  A replacement engine was fitted, which however vibrated badly, and further work was done on it which obviously sorted the problem in that SW came home the winner at 67.54mph.  The bike had registration number ON7170 and here are a couple of photos – one a paddock shot (above) and one – well known (below) – showing a jubilant Stanley at the finish on, one assumes, the same bike. 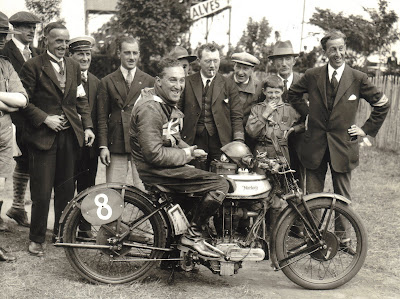 It is not, as far as I know, recorded exactly when or how but this particular machine became Stanley’s property.  It may have been given to him by a grateful management or he may have bought it. Whatever, it seems he loaned it to fellow Irishman  B G D’Olier for some events in 1927.  B G D’Olier, I have been told, lived and farmed in South Africa but returned to his homeland from time to time. On a recent visit to Dublin I noticed a large 19th century block in the city centre called D’Olier Building from which I assume his family was reasonably well off.  Be that as it may, he must have been friendly with Stanley to be loaned his Norton. However, in 1928 Stanley sold ON7170 to leading Yorkshire clubman Bill Milner. Stanley had become friendly with the Milner family and in his early days at Nortons (he was issued with a sidecar outfit and travelled the country as a sales rep.) stayed with them at regular intervals.

How did I become interested in these events?  Some fifty years back, I bought a pannier tanked flat-tank OHV Norton - albeit with a standard, not dry sump, engine. This had registration number OX1619 and I set about trying to find out about it. I spoke to Geoff Davison, former Lightweight TT winner and by then publisher of the TT Special and member of the Vintage Club. Geoff said he knew nothing about it but suggested I contacted Bill Milner as he felt sure Bill had owned the ex-Woods bike at some stage. A letter to Bill brought forth a prompt reply (below) along with a subsequent screed.  Note the name of Bill’s house – Norton Woods!  Bill rode the bike in the ’28 Amateur (he retired with rocker problems after other mechanical problems in practise) and his comments are interesting even though he is not quite right in saying no pannier tanked bikes were sold.  As he recounts, he sold most of the bike to Ernie Jackson of York, with, he told me in a subsequent conversation, the frame going to Ernie too but at a later date. Ernie was an inveterate builder of specials and it seems from subsequent articles about him that the original frame MAY have been modified to have rear springing on it.  The net result seems to have been that a machine containing the TT engine from ON7170 became one of several Jackson Specials. 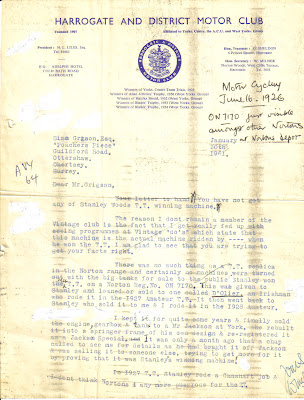 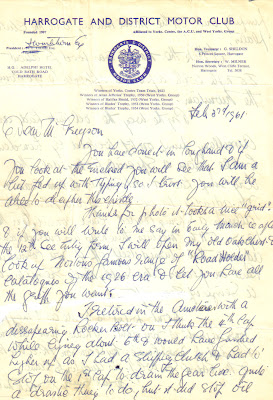 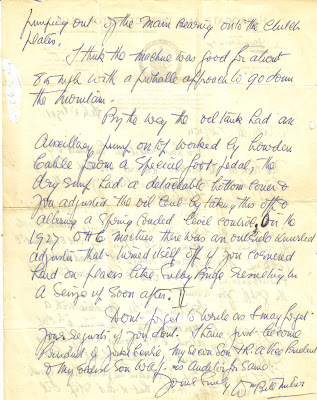 Then the trail goes cold until a small advert appeared in the VMCC magazine in February1968.  It read: “1926 Norton Model 18. This machine is rough, dismantled, incomplete and has been fitted with rear springing but is undoubtedly a Works TT machine reputed to be Stanley Woods’ winner.  Special dry sump motor, large pannier tanks, special frame. Some spares including 1927 TT Replica engine.” And the price for this desirable package ... eat your hearts out, chaps ... £20.00 or near offer!

Who actually bought it, I am not wholly sure but move on to 1980 and an ad. appeared in Motor Cycle Sport reading: “1926/8 OHV Norton. Authenticated 1926 TT winner’s log book. “ I forget the price but in any event, at the time, I was involved in a new job and a new house and felt I had to be content with what Nortons I already had, to say nothing of my ex Brooklands Flying Eight Coventry Eagle. So, after a short interval I rang the advertiser, a Mr C W G Chandler, for a chat about his – by then ex – bike.  He told me that it was not a flat tanker but was a 1929-ish frame with a 1926 Dry Sump TT engine fitted – first registered in 1936 as the Jackson Special AVY 64 -  and that when he bought it, it was entirely dismantled and included a pair of pannier tanks, which he had sold separately.  He had assembled a bike from what was there and as a result it had a later ‘top half’ and Norton forks/front wheel. 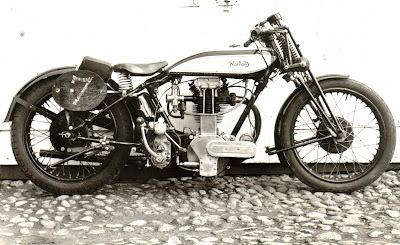 After a couple more owners, the Jackson Special in this form (above) finished up with a good friend – sadly he died a few years back – and is still owned by his family. What became of the original frame is anyone’s guess.

A final word on this convoluted tale – the despatch books list the 1926 TT machines and against one of them – in faint pencil – is written ‘on loan S Woods’.  Was this ON7170? Quite likely.  However the engine now in the Jackson Special has number 30589 – not the number of the ‘on loan’ bike. And although this number appears in the list there are no details shown against it of any sort. Whether it was a number allocated to one of the spare TT engines, fitted to ON7170 after the original practise blow-up, can only be assumed. It is all too easy to draw conclusions from unsupported snippets of information (a trap many authors of motor cycle related books  and articles fall into ) but all I can confirm with certainty is that the bottom end of  30589 shows the main sign of being a TT  engine in that it has 1” mainshafts as opposed to the smaller 22mm shafts fitted to all of the rest of the range at the time (including, when they became available, the Model 25s).....

Postscript: Our eagle eyed contributor Roger has suggested that the Keig paddock photo of Stanley on the bike with reg. number ON7170 may NOT actually be the bike on which he won the '26 Senior. He points out that the steering damper knob is mounted a different way up and also that the handlebar grips differ (albeit the photos are taken from opposite sides).  He also considers that the magneto stay support lug on the front down tube is in a slightly different place on the two machines shown.  He may be right about their identities even though it does not really seem to alter what Bill Milner has related.  At this point in time, it's difficult to be 100% sure.
Newer Post Older Post Home