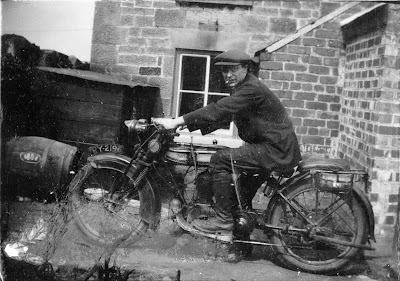 Matt in the UK sent this photo of a cousin on his Norton. "The chap in the photo was born in 1902… mind you, having been down the pit since he was 14 it is feasible that the poor bloke looks a lot older than he is"

-JdK- Now this is a rare one; it's a Model 14, identified by the 4-speed crossover gearbox and the 633cc sidevalve engine. (right mouse click on photo - open in new screen - for a better view)

-SG- What a great picture - note obligatory cigarette on the go! I think it must be 1926 as the bike has an 8 inch Enfield rear brake and anyway I think you will find 1926 was the first production year for the four speeders. Note the regular S-A single spring clutch which was used on the four speeders. This also became a regular fitment on all the 1926 bikes.

-Martin- The number PY2196 was issued by Yorkshire County Council (North Riding) in late 1924, the numbers for that year starting at PY534 and ending at PY2481. I love the background details too, the stone house with brick outhouse, the coal box and the barrel and dish for the dog's water. Obviously a man of taste as well as substance!!  I have a set of clip on rear footrests exactly like those he has fitted for 'the missus'...
Newer Post Older Post Home