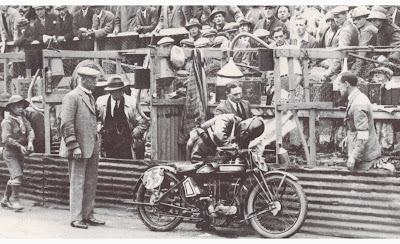 -SG- The 1924 Senior TT was won by Alec Bennett on a racing version of the Model 18 and various images exist of him on the bike - mostly after the end of the race.  Here's one taken during the re-fuelling stop which shows that none other than Walter Moore was acting as pit attendant. Although the photo is a bit fuzzy, one can clearly make out the large oil tank with supplementary chain oil tank on the front - and the 8" rear brake, which, at this stage, was apparently a drum from a Model T  Ford grafted onto the Enfield hub. Fifty years back I had one of these drums complete with mounting studs but did not realise what it was ...
Newer Post Older Post Home