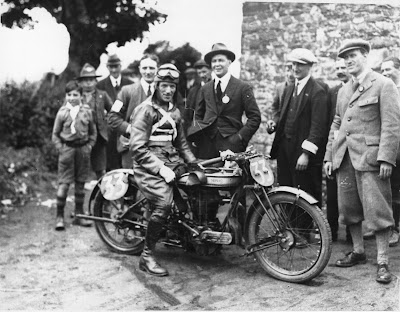 -SG- In the course of his Excelsior investigations Paul Ingham came into contact with the late Norman Webb - owner and restorer of I think two of the Mechanical Marvel racing Excelsiors of 1933. When I visited Norman in the sixties, the first of these was in pride of place in his sitting room! Be that as it may, Paul has finished up with some of Norman's albums which include this photo.

It hardly needs a caption - Alec Bennett, with Walter Moore and Bill Mansell after winning the 1924 Senior. Probably a press photo but no indication of who took it.
Newer Post Older Post Home