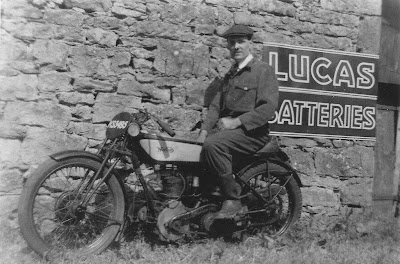 -JdK- Mark sent this photo of his dad on a Norton. Here's Mark's story: "This photo was taken at the garage which my father Rex Allinson founded after the war at his family home in Newbiggin near Stainton Cumberland. After surviving the last year of WW2 as a flight engineer on a Lancaster, he sadly died from cancer in 1966 at only 40 years young. I don't remember this bike but do recall a Manx Norton he had in the cellar. He started it up for me one Sunday (maybe 1961), my mum went crazy, and I think it was sold not long after that ..."

-SG- This Model 18 could be 1928, or even earlier, fitted with a modernising saddle tank at some stage in its life. The magneto platform and front engine plates look right for earlier years than '29.  It also has what looks to be a 1925 or earlier clutch and primary chain cover, and of course, some nifty pipe work to get the exhaust pipe to exit on the right
Newer Post Older Post Home