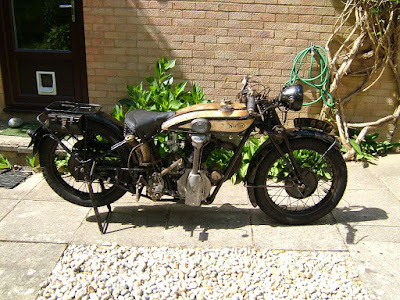 -SG- This machine, (which featured on this website before) last registered in 1931 and almost certainly unused since then, has finally been readied for the road, after a lot of work by Mick and no little expense. I was pleased to be asked down to see the inaugural run last week which went off very well with a trouble free ten minute excursion 'round the block.' A longer trip is planned this weekend. 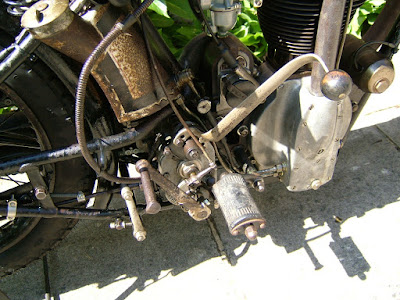 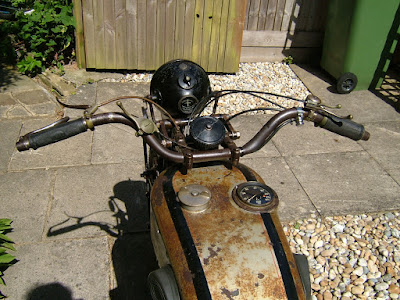 Visible replacements are minimal - tyres, saddle cover, battery, handle bar rubbers, knee grips and carburettor. Internally, the engine has been stripped, and given new bearings and piston. The missing essentials, like oil pump, lower bevels and vertical shaft bearing housing, which the previous owner had gathered from all and sundry, have all been fitted. The carburettor at present in use replaces the original Amal Binks, only part of which was still with the bike when it first surfaced. The Amal Binks has been completed with replacement parts but, for some reason as yet unclear, it is not functioning correctly and the modern replacement at least gets the bike up and running. The tank mounted speedo., with its rather untidy original drive from the back of the gear box, functions as intended while I was pleased to see that the original three brush dynamo works and a charge is registered on the ammeter at the back of the head-lamp.  Even the original bulbs are still in place and they work too.