-Richard- This may be a 1934 Works racer that has seen some modifications later in life. The frame looks like a genuine 1934 Works item with the 2 lugs on the front down-tube for the engine mounts. The forks look like 1934 with the small diameter check springs and the low mounted brake cable mount. This was moved further up the fork leg in 1935 so it could be adjusted from the riding position, amazing it took so long  when you see this picture of Jimmie Simpson. The engine looks like it is later as it has different crankcases to the 1934 works ones. The gearbox looks like a 1934 Sturmey Archer racing type but not the works one which looked like the later Norton/Sturmey dolls-head. Petrol and oil tanks are soldered steel, not the alloy works ones, but the carburettor might be a Bowden racing type. 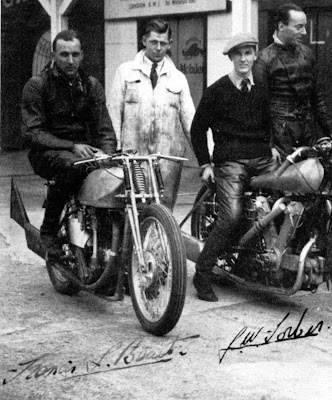 -Roger- I found a picture in Chas Mortimer's 'Brooklands and Beyond' with a line-up of machines including Francis Beart and Forbes with Francis sitting on a Norton with a pale frame fitted with forks with the low adjuster. Looking at this picture I see that it is the same Norton with engine, oil tank, frame, forks and even the front brake exactly the same. It is certainly Jock Forbes on the left of the picture on top.
Newer Post Older Post Home