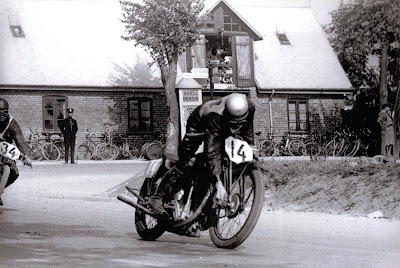 From Simon: "The recent Assen photos reminded me I have another which may be of interest, recently sent to me by a Swedish friend. It shows Jimmie on the Works 500 during the 1930 Swedish Grand Prix doing a quick spot of front brake adjustment. Jimmie won the event and the machine concerned reputedly remained in Sweden with the Norton agents, Nystrom of Trollhatten. It was initially raced by one of the Nystrom brothers in the early thirties before being sold. It has been owned for many years by the same chap but is currently in a semi-dismantled state. I also received a copy of the entry form for the event which shows that the bike had 21 inch (front) and 20 inch (rear ) tyres, Amal carb., Sturmey Archer gearbox and clutch and ML magneto. The bike weighed 350 lb and the relatively lightweight Jim a mere 9 stone 10lb.

Incidentally, I was taken to task a few years back by Jimmie's son for spelling his father's name JimmY. His son said his dad always used JimmIE! See the text below, written by JimmY Simpson junior in a 1998 VMCC magazine"