-JdK- Surfing the Internet I found this interesting little blog "billbrownandhis blog" from which the following words and photos were copied.


Bill: "Like many before me I was introduced into motorcycling through my father. My father had a liking for 350cc Nortons he passed on to me. Indeed just before WW2 he rode with my mother from Greenock to tour the north of France and Belgium. I told him - when I understood such things - he should have paid more attention to newspaper reports on what was likely to happen on continental Europe!

Dad had a short racing career when a member of the Greenock Motorcycle Club, of which my Uncle, Jimmy Clark was the Secretary. Races tended I think to be on the beach at Saltcoats on the West coast of Scotland but I think that they may also have used Ayr. 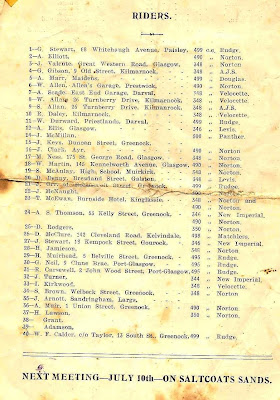 I recall as a boy meeting Andy Marr and Stuart McAuley, both on the programme. Jimmy Valente ran a good motorcycle shop in Glasgow for many years on Great Western Road where all the main dealers had their outlets. My father was not particularly technical but appeciated the work of Joe Potts in Bellshill and Joe Craig who kept Norton machines to the fore in the golden years." 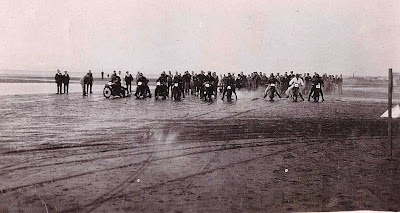