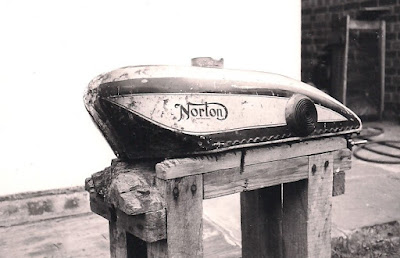 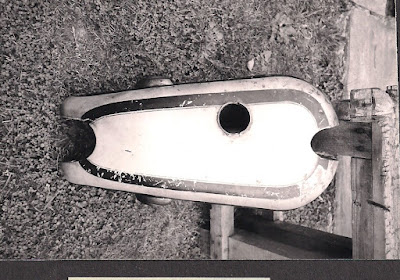 -SG- I recently got a request from Bruno regarding the colour of the tanks of his late twenties CS1 Norton; my reply is reproduced below.

The question of tank painting is not one which we have discussed much in the past.  However it  never ceases to amaze me how many of the professionals, however good their actual skills, manage to do a very poor job of painting Norton tanks. It seems as if they copy other modern inaccurate restorations and do not bother to even look at the numerous ORIGINAL photos which exist of, for instance, late twenties CS1s or other Nortons of the same period.  Unless one is lucky enough to have one of the large racing tanks used on the works machines at the end of the twenties, then it appears to me that those used on 1928/9 CS1s and ES2s and on virtually all the 1929 models had the same lining. At the time it is likely that the lining was all applied by brush and by hand and there may well have been small differences between one painter's work and that of one of his colleagues.  I attach (above) a couple of photos of a tank from 1929 which was original (I no longer have it) and also part of a letter (below) I sent in 2007 giving some dimensions and also comments about oil tank lining. I recommend you take a careful look at the various photos of original and unrestored machines on the web site - ignoring the works bikes - and use them and my photos/dimensions as guidance.

I do not personally know the specific colour codes for the red lining (perhaps RUBY RED is a correct description) or the silver for that matter but the general opinion these days is that the silver used by Ford Motor company - their spec. FORD SILVER FOX - is very close to the original Norton shade. 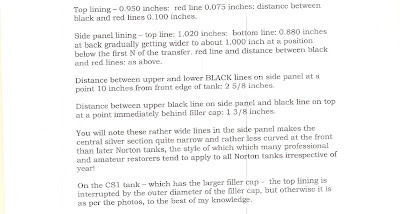 PS. Andrew, whose CS1 has been on the site before, has done some checking on the paint shades he has used on  Vintage Norton tanks over the past twenty years or so.  I have also sent him a paint sample taken from the area under the knee grip of my former tank (see posting of 5/12/22).  Here are his comments:
"Originally I used Opel Silver Mist code 17u which matched the paint on the CS1 tank when I bought the bike in the first place.  And of the colours I have used, the closest to your sample happens to be the same - Opel Silver Mist code 17u! But of course, with all paints, the final shade relies on the undercoat colour and silver metallic top coats benefit from a light grey undercoat.
George Cohen wrote in his blog back in 2002: Norton Silver can be replicated by using: 1974 VW Beetle Silver or Vauxhall Star Silver Mist, or, for the greeny patina, use Vauxhall Platinum Starfire Metallic or VW  Audi Platinum (ICI:L98G 9305B).
I have since re-sprayed my CS1 tank with BMW Lachssilber 203, which is a little darker and which I prefer."
Thanks for your input, Andrew!
Newer Post Older Post Home