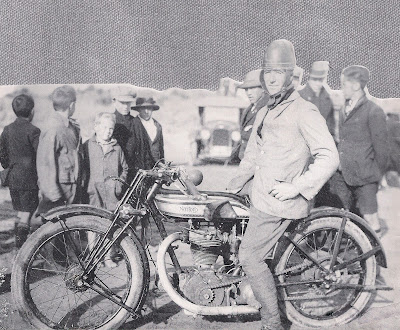 -SG- Back in 1995 Beaded Wheels (New Zealand) printed the above photo of an unknown rider, taken at an Otaki Beach sand racing event in the thirties. Thanks are due to Peter Thomson, who has provided material for several interesting postings about New Zealand speed events in the past. Peter has done some research for me in the Thomson Motor  Museum archive and has come up with Dick Lawton (on the left of the photo below) as the probable  rider of this 1926-ish Model 18. 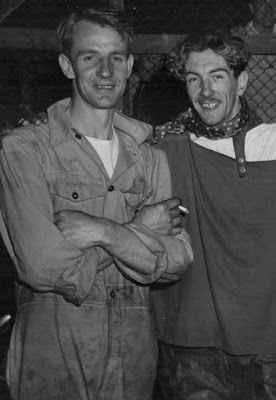 To quote from Peter's message: "Richard 'Dick' Lawton worked for Tolley and Spence is his younger days and later owned a motorcycle business in partnership with Don Boyle - Lawton and Boyle. Dick was a tuner of quite some repute and in the 1970s got the attention of the Suzuki factory, when he really got their two-strokes going, ably ridden by Geoff Perry."

Peter has sent several other Norton related photos, mainly taken at Beach racing events is the late forties, and they will be the subject of a separate posting.