Things are seldom what they seem ... 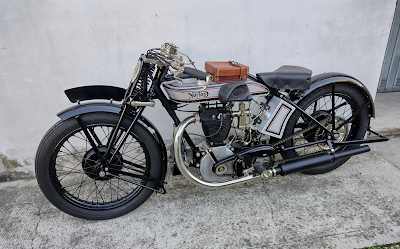 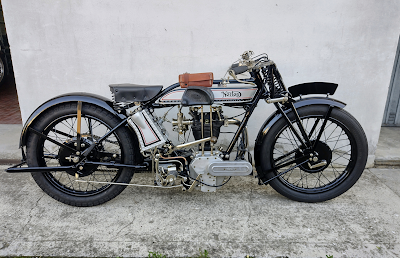 And it seems to me those very words apply to a machine currently advertised on the Car and Classic web site. It is listed as a Model 25 and the restorer has certainly made a lot of effort to make it look like one. But is it?  The engine -  number fully visible in the photos - started life in a Model 21 supplied in March 1927 to dealers Harold Petty in Leicester, who in turn delivered it to their customer, another Leicester resident, later in March. The advertiser (in Italy) kindly gave me the frame number but  it is not the one which started life with this engine in it and frankly I could not find it in the records. But I accept I may have overlooked it. Suffice to say, it is not Model 25 as it is missing the full wrap around magneto support bracket on the front down tube. Other modifications to make it appear more like a Model 25 are the large size oil tank, large size petrol tank with top bleed tap, and LS gearbox - fitted to some Model 25s built to racing specification.  Also the very nicely made leather tank-top tool box. The forks are standard period Webbs and the front brake is a 7" unit by the looks of things. Model 25s had TT Webb forks and an 8" Enfield front hub. Of minor importance, the exhaust valve lifter mechanism fitted is of the type used on same period ES2s and 1929 Model 18/19s and the ML magneto is the wrong type.

Is it a good looking machine ? Yes!

I have suggested to the advertiser that he changes his description to 'Replica Model 25' - so far without response.