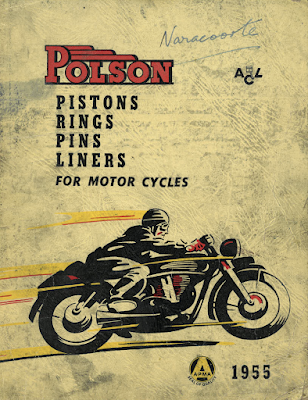 -SG- Those with a longish memory may recall that the 1930 DT engine in Dunedin is fitted with a Polson piston. A further query has come up from Paul, who is working on a well-worn late forties Inter, which belonged to his father. A couple of Polson  pistons were with the bike and Ian has been a big help - as usual - in identifying them. He has also sent scans of the 1955 Polson catalogue and the relevant page with Norton pistons listed on it.  These scans are attached via this link and many thanks to Ian for providing them.

Incidentally, he tells me Polsons started trading in 1927 - the name derived from the surnames of the founders, Herbert Pollard and Edward Nason.  Pollard died in 1936 but Nason carried on in the business for many years, eventually becoming part of Jack Brabham's Repco organisation. After various company ownership changes, Polsons appear to have become part of ACL-Mahle - producers of the well-known Mahle piston range.