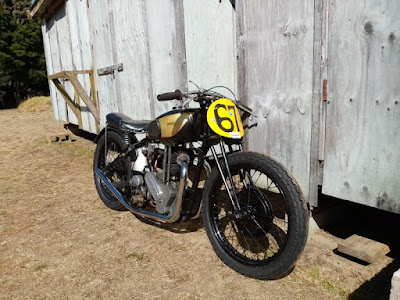 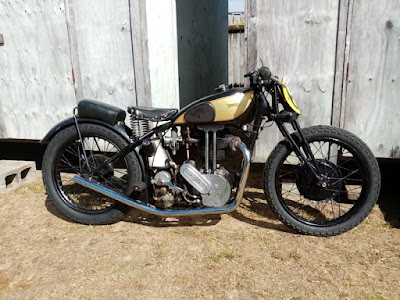 -SG- My good friend Artie has been involved in Classic Racing in NZ for the last forty years or thereabouts. For several years he was using a 1951 Manx powered by an Inter engine of the same age which he had acquired in 1969.  He used this machine as a road burner for a while in the seventies but returned it to track trim when Classic Racing started in 1979.  A few years back he obtained and fitted the original DOHC engine to the Manx - which had been modified to the short stroke spec. in 1954.

More recently he has been riding a Model 22 built up in 2005 from random parts collected over the years - in his own words 'a real bitza!'  The engine is 1931, the cradle frame probably mid-  to late-thirties, thirties doll's head gearbox and forks, and - a recent improvement - an 8 inch front brake from a fifties Norton tweaked to fit the girders.  While it is not in the same league as the - now very few - pre-war OHC Nortons being raced in NZ it has given Artie many enjoyable rides over the years and another outing to the Covid-delayed Pukekohe meeting is planned for the end of April. Good luck!