The Norton Motorcycle Club gathers outside Kerleys in 1930 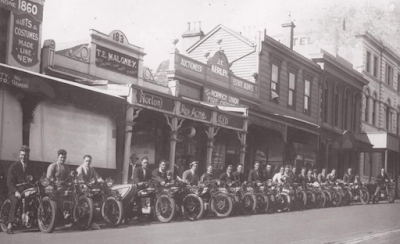 -SG- Norton motorcyclists line up outside Kerleys Auction Rooms Geelong. Thanks to Ken McIntosh for the link to this photo.

-Ian- The photo first appeared in a book "Touring and Sporting Motorcycles in Australia" by Mick Kingwell.  The book was recorded under ISBN 0 9592863 0 3 and published in the late 1980's I think. The photo is on p24 and the book contains some great early Norton photos. The copy supplied by Ken was published in the Geelong Advertiser newspaper on Oct 13, 2017. Geelong is the second largest city in Victoria.

If you look closely at the photo the bikes are actually lined up in front of Tom Maloney's motorcycle shop at 183 Moorabool Street, Geelong. (He was the Norton agent as well as some other marques). The club is the Geelong Norton Motorcycle Club and the photo was taken in April 1930. Tom Maloney was one of the major motorcycle dealers of the time and he and brother Reg well known on the racing scene.
Newer Post Older Post Home