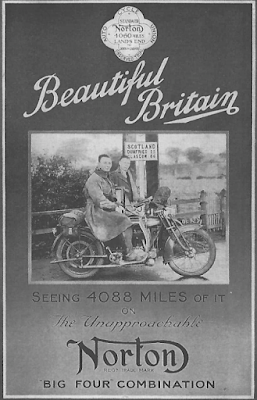 -SG- Back in November 2016 we posted a photo of Phil Pike/Arthur Bourne and the late 1924 Big Four outfit used for the factory's successful Maudes Trophy attempt. The photo was provided by Ian and he has now loaned a small commemorative booklet published by the factory along with a copy of the relevant ACU certificate of performance.  Scans are attached and many thanks to Ian, yet again!
The award was gained following a 4088 mile  ride around the country with a standard Big Four outfit assembled from stock parts, under ACU supervision. West Country dealer Phil Pike was at the helm and the sidecar passenger was ACU observer (and later Editor of Motor Cycle magazine) Arthur Bourne. The whole project nearly came to grief when the outfit and a charabanc collided.  This necessitated a new frame, forks etc for the outfit - apparently provided by the nearest Norton dealer and fitted by their mechanics under ACU supervision.
Newer Post Older Post Home