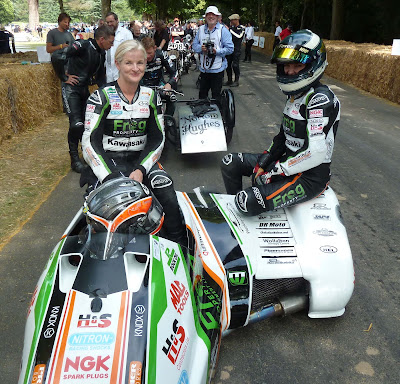 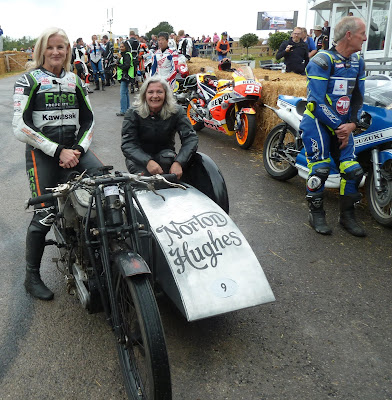 -Roger- LPD1 was invited to the Goodwood Festival of Speed on 4-7th July to accompany the Napier Railton and we were ably supported by the Brooklands motorcycle team. Three racing sidecar outfits were in the lineup: the 2019 TT winning LCR outfit of the Burchall brothers, Maria Costello's LCR and LPD1. Maria Costello also rode a Paton in the Lightweight Race becoming the first woman to ride in both a sidecar and a solo race in the TT. With Julie Canipa they became the first female crew in the history of the TT and the finished at an overall speed of over 101 mph.

I rode on all three motorcycle days and we had two runs a day. On Saturday Paul Denly, Bert Denly's grandson, was the passenger. I wanted to experience being a passenger on Sunday so Karen Anderson, one of the Brooklands team, agreed to drive although she didn't need much persuasion! She was one of a number of the Brooklands Motorcycle team to support LPD1 over the four days for which I am most grateful as the event was exhausting enough even with such fantastic support. The first picture was taken on Saturday with Maria on her LCR ahead of LPD1. Seated on LPD1 is one of the Burchall brothers being instructed by Paul Denly on the role of the numerous handlebar levers.

The second picture was taken at the top of the hill on Sunday with Maria on the left and Karen on the right. Maria was the first woman sidecar driver up the Hill and Karen was the second although she was slightly slower out of respect the LPD1's age. The winner of the 1925 Sidecar race averaged 55 mph so there perhaps we should have been more respectful.
Newer Post Older Post Home