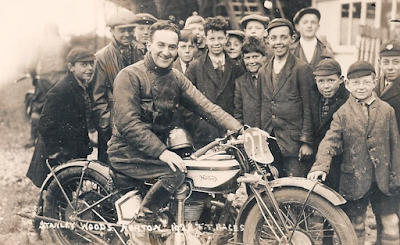 -SG- I spent a while searching the records recently for the frame number of the Brooklands CS1 belonging to the Bain family (see yesterday's post).  Did I find it ?  Regrettably not!  But what I did come across were the consecutive entries for a dozen CS1s, all shown as despached to Norton Motors in May 1928 and all shown as TT machines.  Two of these were subsequently fitted with replacement frames and despatched in June and September 1929 to Mototecnica in Italy - with the note against one of them 'For Ghersi.'  There are no additional details as to how this small  batch of machines differed from the production versions but I guess some or all were fitted with the 7 inch front brake  (see postings of Woods at the '28 TT) rather than the 8 inch Enfield version.

I was told some years back by the late Peter Roydhouse that in his view, the works bikes of the time were used for a couple of years before being replaced.  If this is right then some of these machines - albeit with up-dates -  would have been used in the 1929 racing events as well.
Newer Post Older Post Home