An even bigger CS1 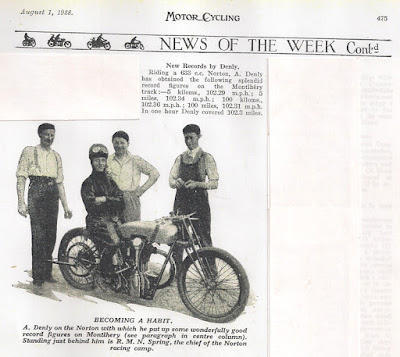 -SG- We have had various postings about a 588cc CS1 with which Nigel Spring and his cohorts achieved some records at Montlhery in the summer of 1928.  I even found an entry in the Despatch Records which showed a 588 CS1 with Brooklands frame despatched to Spring in 1928.  It now transpires that perhaps the photo we posted showed a 633cc CS1 - a brief mention of which appeared in Motor Cycling at the beginning of August 1928 -  see scan attached (courtesy The Classic MotorCycle).  While Roger casts some doubt even on the existance of such an engine  - of which he has found no mention in his considerable researches into Norton's Brooklands activity -  there is now positive proof  as it and a Brooklands CS1 frame are being restored by Geoff and Ian Bain , who bought it after then owner and Vintage Norton enthusiast Stan Johnson died in 1984. They have sent photos of the frame and engine and I quote from their email: "Your photo of Bert Denly on Nigel Spring's Brooklands style CS1 sheds new light on one of my father's bikes. My father acquired what he thought at the time to be a sidecar racing CS1 from the Stan Johnson Stable when Stan died . We were aware of the 588 cc racers of the time but this engine is 82 bore and 120 stroke making it 633cc which is actually stamped on the flywheels . The flywheels are also forged steel and all components highly polished .Also of interest is that the engine has vernier cams and an AMAC carburettor which is over 1 1/4" bore. The frame is much longer than standard and a lot taller to accommodate the much taller engine. So tall is the frame that when we put standard 19" wheels in it they didn't touch the floor hence it was designed to take 28" beaded edge wheels. The frame only has provision for a dummy belt rim brake as it has the same lugs as those of its flat tank predecessor.  The tank is some 4" longer than standard with cutaway fully exposing the cambox. A standard tank will not reach either tank lug such is the length of the frame. It has two lugs for a saddle set very far back and also two footpeg lugs again set very far back. We have found a frame number - which has not yet been found in the records and which differs from the one Simon has already found.  The engine is stamped only with the word "KENT" and, there is absolutely no evidence of a number being removed ... "
Newer Post Older Post Home