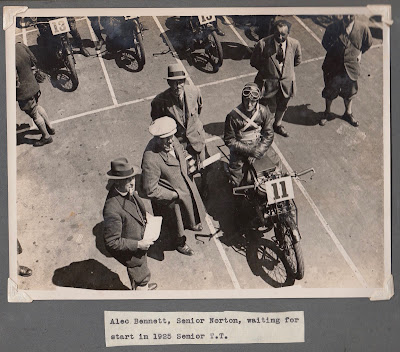 -SG- Kevin was given an album to look through and found this photograph of Alec Bennett after the 1925 TT. Shows off the braced Webb forks which were seemingly only fitted to Bennett's bike. It is signed by Bennett on the back. I once owned the engine from this machine - Norton's 1925 TT machines were fitted with their first semi-dry sump type engine - which was built into a later flat tank frame by a subsequent owner and sold for a vast sum by, I think, Bonhams a few years back. If I remember correctly it was not claimed to be AB's actual bike! Many thanks to Kevin for sharing!
Newer Post Older Post Home