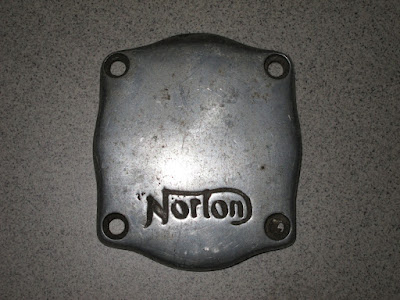 -SG- Juris has been in touch from Latvia and asks if anyone has a Moore CS1 upper bevel cover to swop for his spare early Carroll version -  see photo above.

He also reports on essential surgery to his Model 25 tank - see the pic below. Incidentally the Model 25 was used on the recent Irish Rally and unfortunately suffered piston failure, perhaps resulting from low quality fuel. 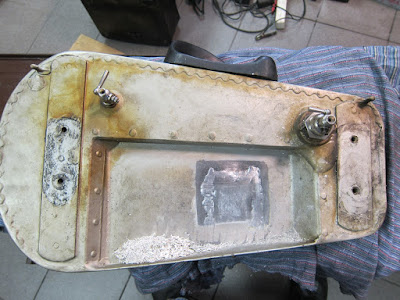 -Juris- Our Norton Model 25 developed a tank leak during a recent road trial. The fault seems to have originated a long time ago when someone had cut a hole in the underside in a “U” shape and pried it open - possibly to bash out a dent on the top. Then it had been bent back and soldered over and finished with a thick layer of putty and paint. It looked mint!

As we all know lead or tin does not withstand vibration, hence pie crust joints etc. have been used for a long time (although on my 1917 tank there is no pie crust corner work!). So my solution was to cut a copper sheet in the shape of a “ u” with overlapping edge about 15 mm to each side of the cut, tin it in solder from both sides, then apply heat with a soldering iron and press down section after section with a screwdriver till it sets. The tank seemed to have been attended to professionally and it held for over 15 years, but still, these things happen (… especially if a bike is ridden and not just looked at! (SG))
Newer Post Older Post Home