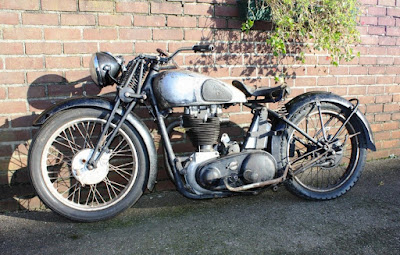 -By Olav- Here’s a couple of pictures of my ES2. Frame and engine are 1939 ES2 while forks, gearbox and rear mudguard are WD16H items. I bought it last summer as a project (above), missing quite a few parts. I worked hard last winter to rebuild it. Stripped it down completely, the only thing I left in place were the spokes in the rear wheel, all other parts had to be reconditioned or replaced. Painted everything by hand, excepts for the tanks which I sprayed with something that resembles a ‘weathered’ chrome-finish. The silencer is something I had laying around, the battery carrier is of my own design, to accommodate a large 12v battery I always use (I don’t use a dynamo; 12 amps of 12 volts give me several hours of good lighting, and I never ride that long in the dark). I fitted the hidious air-filter because I want the expensive BSA B44 piston I used to last as long as possible. 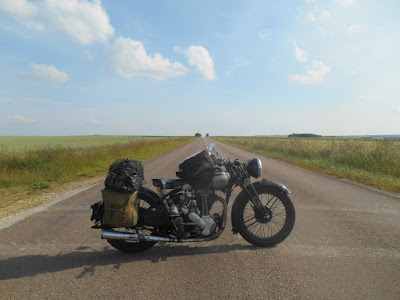 I got it running in March. Last week I had the week off and went to visit my parents who live in de Dordogne in France, some 1000 KM south from where I live near Antwerp. France is a great country for riding your old bike. Using only the small D-roads it’s always pure motorcyling happines as far as I’m concerned, especially when you’re coming from overcrowded and traffic congested Belgium and Holland. 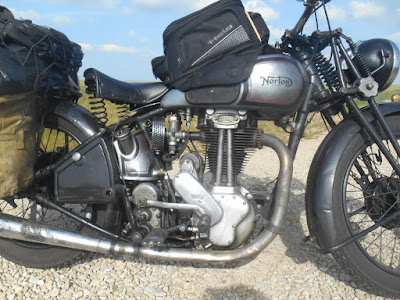 The first day, passing trough the Belgian Ardennes, and then trough spacious and hilly northern France, went great. Long roads, up and down slow hills, with beautiful weather all the way, pitching my tent on a nice camp-site in Tonnerre about half-way. The second day the surroundings change to ever thicker woodlands and the roads start winding more and more, as you go trough the western borders of the Auvergne and get nearer to the Dordogne region. Also, at midday, I had some serious torrential rains with thunder and lighting, but the Norton didn’t mind it a bit and for me it ment I didn’t bring my rain-clothes in vain. Towards the evening the skies cleared again so everything was dry when entering the lusciously green Dordogne and shortly after arriving at my parents place near Montignac-sur-Vésère. 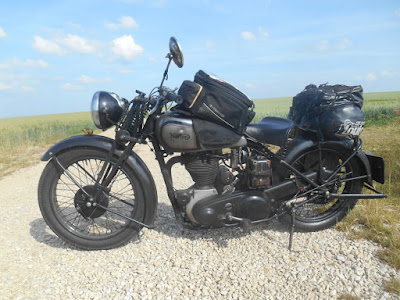 There my bum had two days to recover from it’s ordeal. The Norton needed only minimal maintenance, adjusting valve- and contact-breaker clearance, chains, and front fork spindles. The only repair needed was some wire around the front downpipe-stay, which had broken. 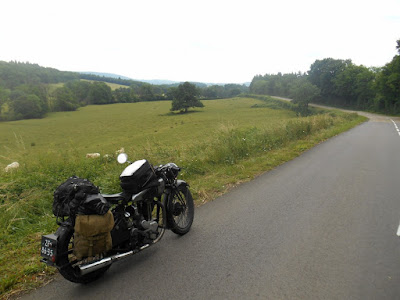 The return trip was again ‘tres agréable’, doing 600 KM on the first day. At a very nice camp site near the lake region at Brienne, a Scotsman came up to me and offered me a beer. After a hard-days riding in hot sunny weather, you can imagine how good that fresh cold beer tasted. Next day started out grey and wet, but it cleared once I entered Belgium. After Namur progress became slow and tedious, coming into ‘populated’ areas, and closer to Antwerp it was the familiar traffic nightmare again. 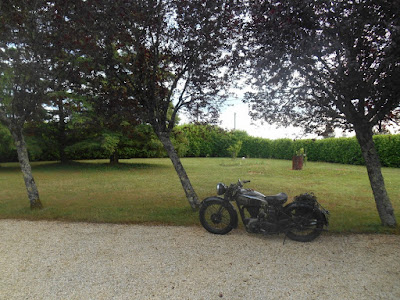 But still, I had some great days of motorcycling to look back on, and what better way to enjoy those great roads then on a Norton!