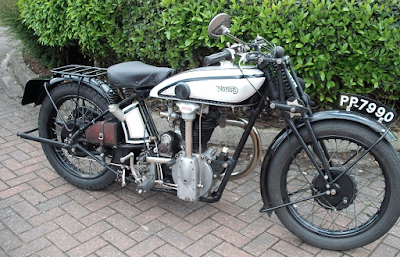 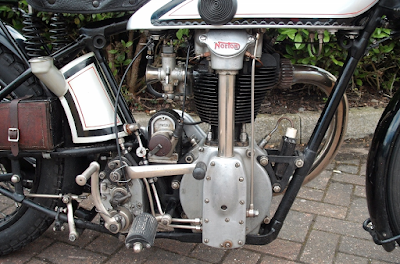 -SG- The Banbury Run organised by the VMCC took place on Sunday and I spent too long loitering in the autojumble area and chatting with friends and not enough time looking at the entrants' machines - neary 500 of them including a fair smattering of Nortons!

'Vintage and Veteran' had a good looking 1928 CS1 on their stand - for a little matter of £24999. The description reads as follows: "Cammy Norton in great condition. This nice 1928 CS1 Norton has been owned and ridden regularly in VMCC events since it was restored 33 years ago. It has been well maintained and is in excellent mechanical condition. The cosmetics have acquired the nice patina of a bike that is used regularly, apart from the petrol tank which has recently been professionally sealed and repainted to a lovely shiny silver. The Norton comes with a novel and rare extending side stand. This was a period accessory and it really works well. There is a good file of information, including copies of a feature article in The Classic Motorcycle April 1996 and it was  also the cover photo on the VMCC Journal in January 96. Current UK V5C registration and an MOT certificate to July 2015. Frame number 32016  Engine CS40242." 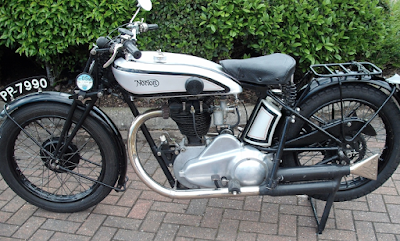 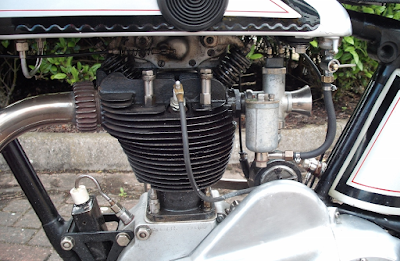 Good looking it may be, but the restorer 33 years ago did not take enough trouble over the details and this should in my view be reflected in the asking price. So what's wrong ... Magneto, front wheel, carburettor, handlebar controls, handlebar clamps, steering damper knob, plating (mix of chrome and nickel), footrests (those fitted are short ex WD type) and arguably the kick start lever (usually straight).  Incidentally, engine and frame numbers are non-matching.

And as for the telescopic side stand. I bought one new in 1958 from Halfords in Guildford and there is a good reason they are now fairly uncommon - it is all too easy to ride off and forget to retract them with damaging results to stand and possibly person! I know: I did! (They also made a posher version - with a cable to a valve lifter lever on the handle bars but it cost more money...)

Richard has kindly pointed out that ESWAY were also into making telescopic side stands in the 1950s, and that the one on this CS1 looks pretty well identical to what is currently fitted to his late thirties Inter (first registered for the road in '51). Another Richard (from Red Devil Motors) found a flyer for the ESWAY side stand, reproduced below. The advert looks as though it is from the 1920s by the drawing of what looks like a 1920s bike, although it looks expensive at the time. It seems as though the ESWAY had quite a long run in production. 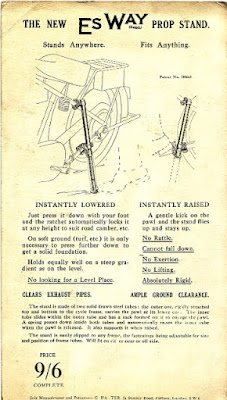