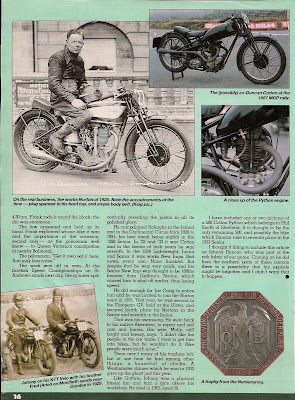 -SG- Gordon Cadzow was the pen-name of Gordon Small - a top executive at the Scottish publishing firm of D C Thomson and Co Ltd, Dundee. As Cadzow, he started and edited the magazine Classic Motorcycling Legends which ran from issues 1 to 34 (Summer '87 to Autumn '95) and despite his - to me - sometimes rather 'schmalzy' way of writing, the magazine contained plenty of good articles over its rather brief print run. Gordon died a few years back and in case anyone thinks I am being unkind about him when he is no longer here to fight his corner, I gave my opinions when the magazine was first published and Gordon sent a very civil and good natured response.

Issue 4 contained an article about Scottish racing man J G Duncan, who was a member of the Norton team in 1935 only, after riding Raleighs, Cottons and New Imps in the preceding years with moderate success. This is provided (above) and in it, Gordon acknowledges the help he had from Johnny's nephew in Aberdeen. But the story does not quite end there ... 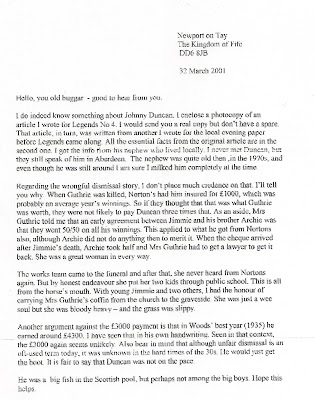 Back in 2001 former Irish racing man Joey Wood (also no longer with us) wrote to Gordon, seemingly raising the matter of Johnny Duncan's contract with Norton's, or, rather, the breaking of the contract and the possible level of compensation paid to Duncan as a result. David Crawford in Northern Ireland has kindly sent a copy of Gordon's response on this subject, which I find well worth reading! It, too, is attached (above). While Gordon's letter gives his opinions on the compensation issue, his additional comments regarding Jimmy Guthrie's widow and brother are also of interest.
Newer Post Older Post Home