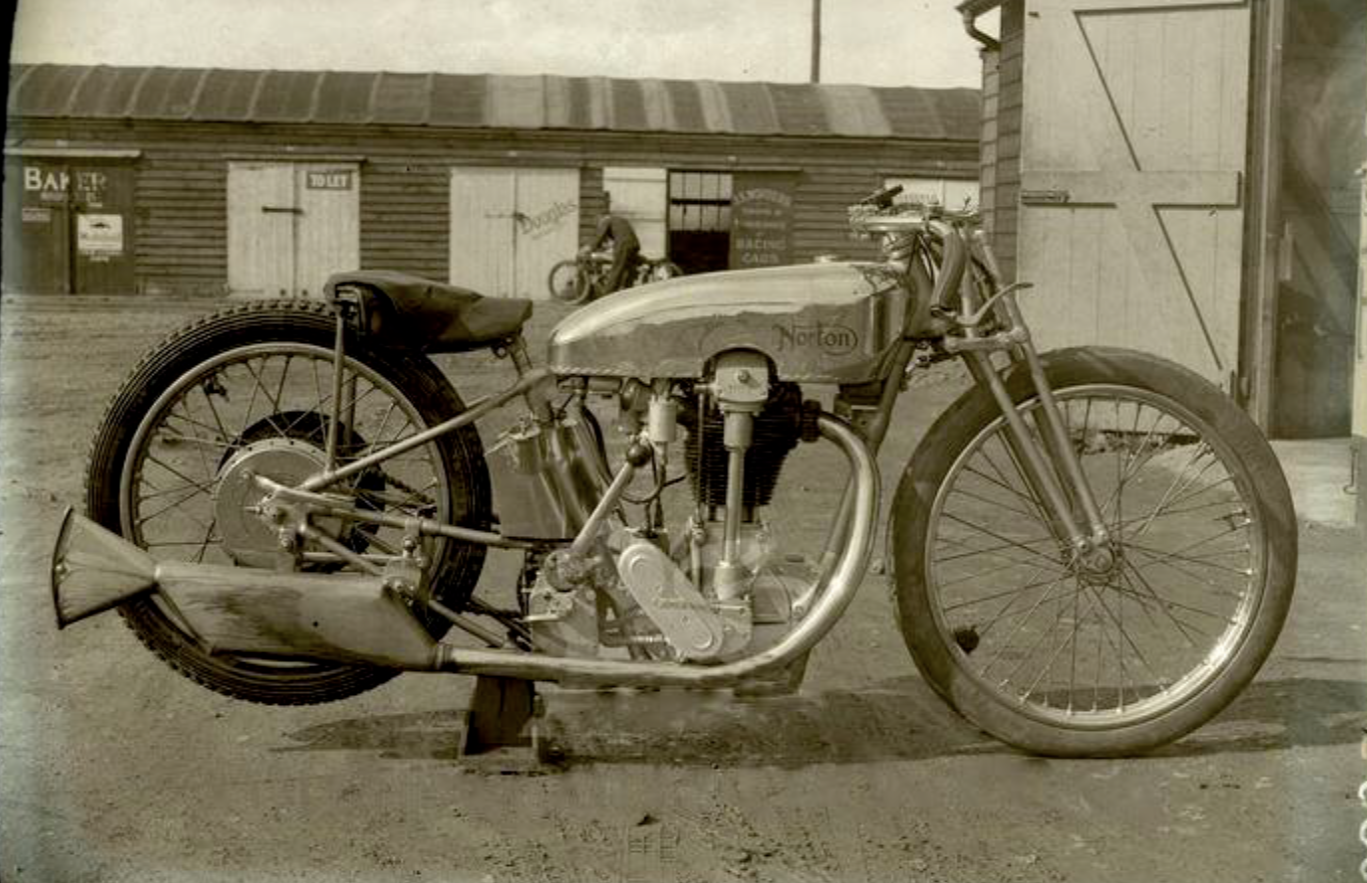 -SG- Following on from his successful spell with Grindlay Peerless in the second half of the twenties, Bill Lacey became Norton's official and very successful Brooklands rider/ tuner in 1930/31. Roger has established beyond reasonable doubt that Pat Driscoll was also involved with Bill - hence Driscoll's early thirties mounts being fitted with Druid ES front forks - but to what extent he was involved with the development of Lacey's Carroll engined steeds is not entirely clear to me. The talk Bill gave in the eighties which I attended (and at which I made detailed notes) did not in fact mention Driscoll as being part of the enterprise, but perhaps no one (including me) asked the right questions at the time! There are various photos of Lacey plus Norton in circulation, some of them taken at Montlhery and some at Brooklands. All show a three stay framed machine fitted with Carroll engine of either 490cc or 588cc, and an N type racing Sturmey Archer gear-box, as used on the 1930 works machines (and a few others supplied to favoured dealers.) And, as we have mentioned before, the forks are ES Druids.

The Brooklands photograph of Lacey's Norton above is one I have not seen previously and it shows off the bike to perfection. In case it's of interest, I can say that the rear rim is 20 inch and the front 21 inch.  The twin-float Amal carburetter - almost certainly a Type 27 set up for use with alcohol fuel - shows a considerable down-draught angle and is - I think - also offset to the right.

Here let me add a personal post-script: back in the late fifties, not long after I had joined the VMCC, I was made welcome by John Offord and his wife. John was a highly skilled sheet metal worker, and produced sundry examples of his art from his modest works in Crowthorne. For instance: fuel tanks and other parts for Norton tuner Ray Petty: full streamlining for George Brown's Vincent sprinter 'Nero,' and another for Francis Williams (Norton JAP sprinter): racing car bodies in magnesium sheet for one of the GP teams. Next door to the Offords lived a chap with a Norton - not any old Norton, but, he declared, an ex-Lacey, pre-war Norton. I saw it - once! As I recall it, was a girder forked bike with a Carroll engine but all set up for road use with lights etc. But he said it was 1932 and in those rather distant days, if it wasn't pre-1931, then it wasn't that interesting! I heard later that he sold it to Vintage Norton tuner and cylinder head specialist Stan Johnson, and as so often occurred with bikes Stan bought, it was promptly dismantled ... After Stan died, his entire collection was bought by Mick Cox, who sold several basket case Nortons to those who were in the market for them, but who bought the remains of the supposedly ex- Lacey bike, I know not ...
Newer Post Older Post Home