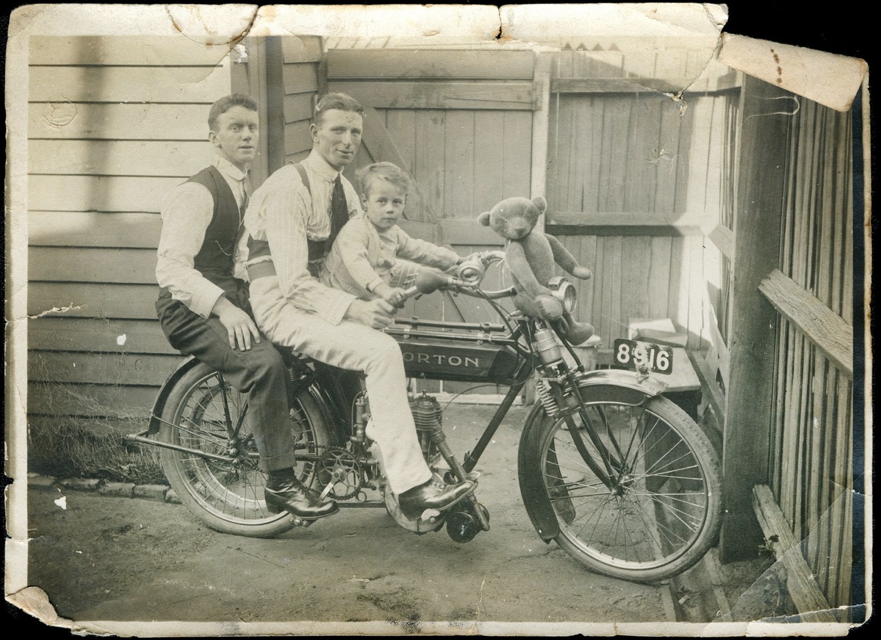 -SG- Howard sent in this wonderful Australian image which recently appeared on Facebook, purporting to be a 1913 Norton.

Howard suggests it could be an Arno. As far as Howard knows, Nortons never used Arno engines or 'badge engineered' complete Arno bikes so why this example would have Norton (assuming the first, concealed, letter is an N) nicely painted on the tank is a puzzle. Apart from building complete bikes, Arno also supplied engines and a few of Australia's fledgling motorcycle manufacturers fitted them before WW1.

Bob in Australia has other ideas about the machine and rather than just quoting odd bits from it, here it is:

"There was an Australian made Morton motorcycle around about 1914. Little is known about them except what is written in Rob Saward's A-Z of Australian- made Motorcycles. "The Morton Cycle and Motor Works, 282 Park St, South Melbourne, Victoria sold Morton Precision 31/2 hp motorcycles in about 1914. The ownership of the business at that time is not known." His entry then goes on to talk about who bought it in 1920 but did nothing with it so not relevant to us.

The 282 Park Street address exists unchanged and is one in a row of ordinary suburban shops. It gives every indication that this was one of many suburban bicycle shops that at that time would erect a motorcycle from whatever was to hand. This one happened to get an Arno engine.