-JdK- Paul in the US sent these pics of his very nice Model 40 Norton; Simon and Richard have a look. 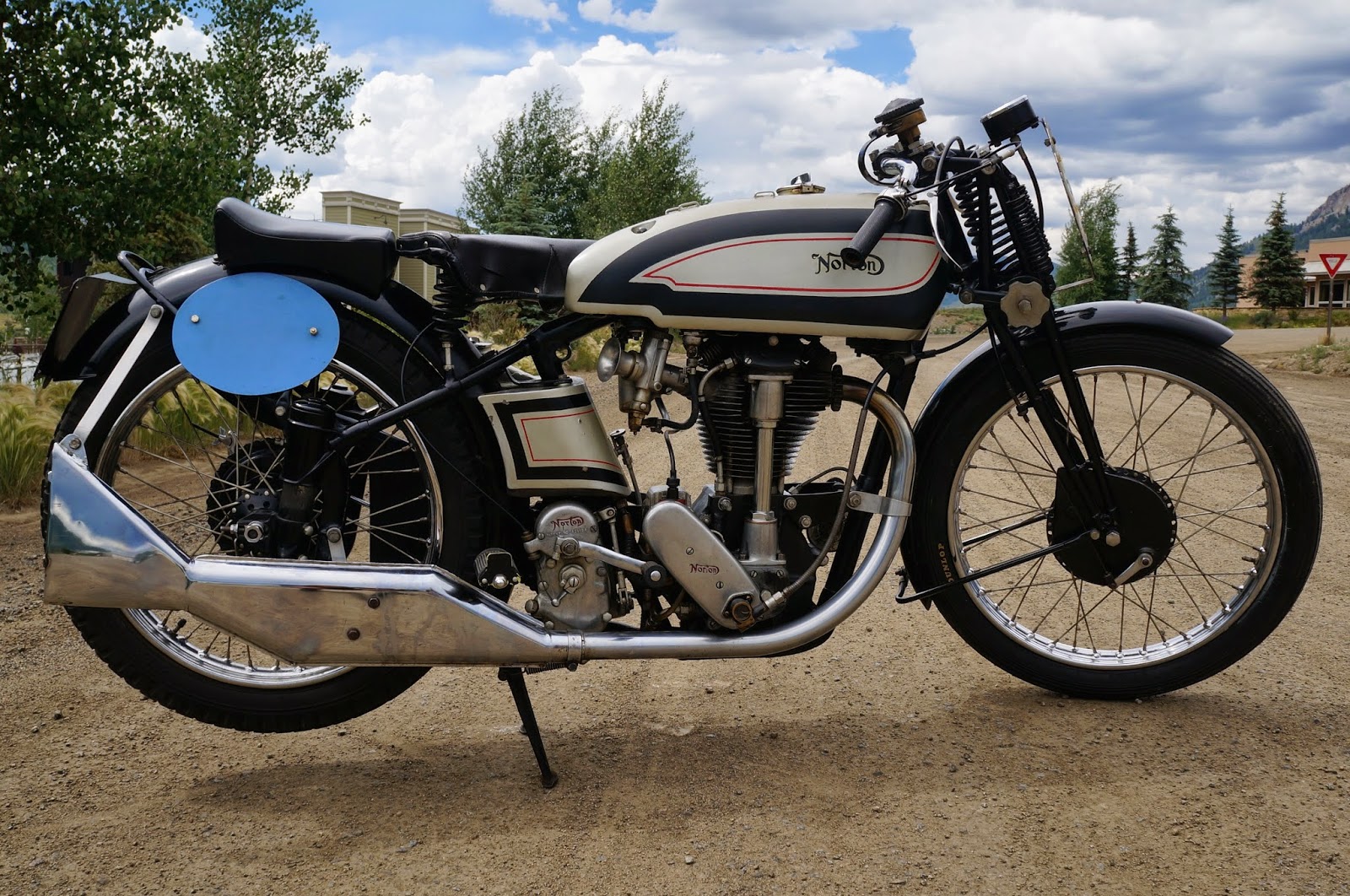 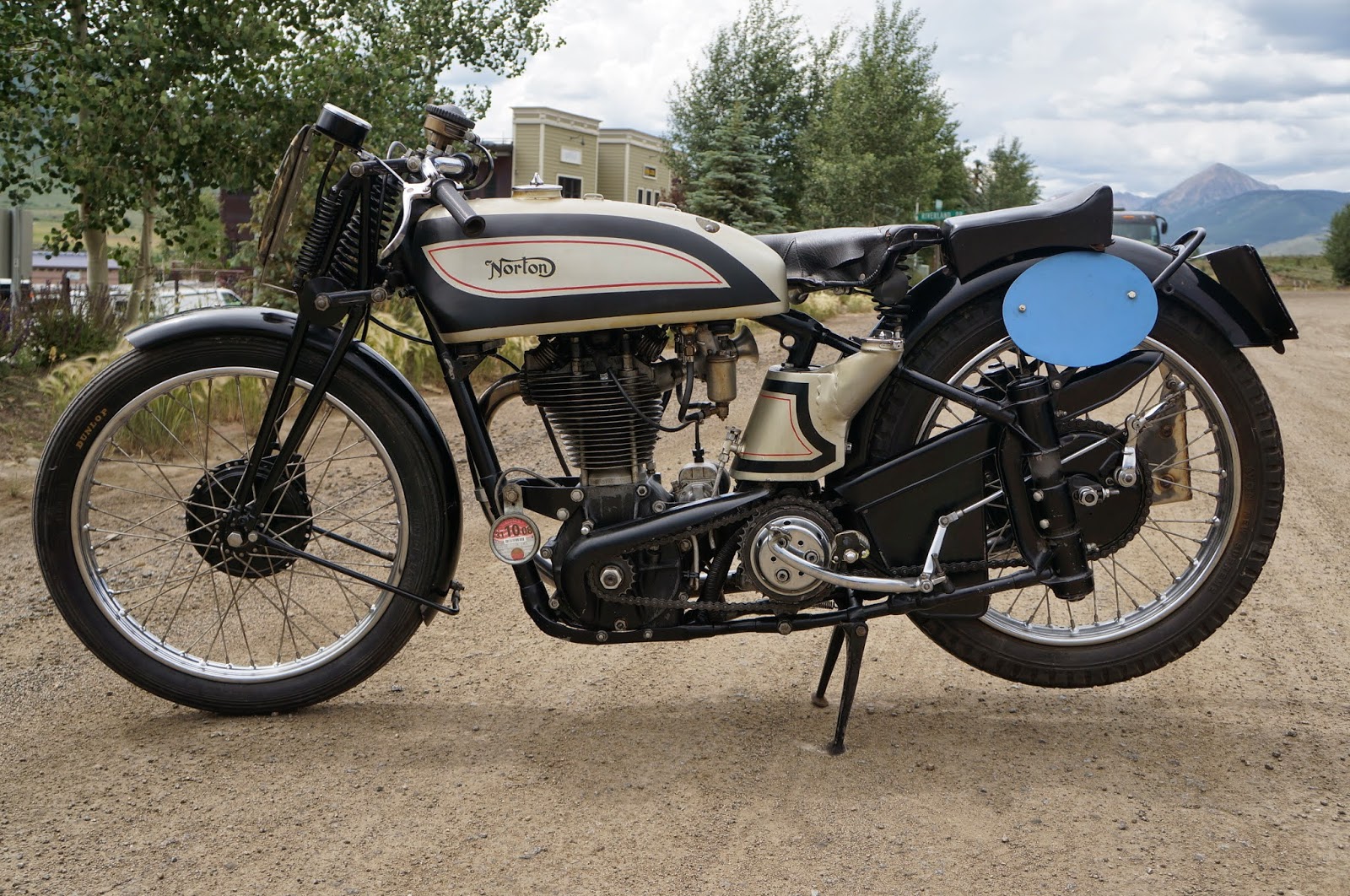 -Paul- I bought this bike five or six years ago in England and shipped it to the US. There are some records concerning the bike from the mid 60's. At that time it was bought, restored, and it would appear raced by a Barry Cryer. Note in the receipt that Barry bought it for 20 pounds. Wish I had! A letter from Matchless details the factory records of a June 1936 machine. The engine and frame still match the original records. The gearbox was changed at some time and is stamped SN 4071. Not "original paint" of course, but I would say it carries a nice patina consistent with a fifty year old restoration. As you will see, it has rear suspension, though I note it as a different style from that on the works bikes. I have a separate note claiming this was one of only four non-works plunger framed bikes made in 1936, but I put that in the category of rumor. 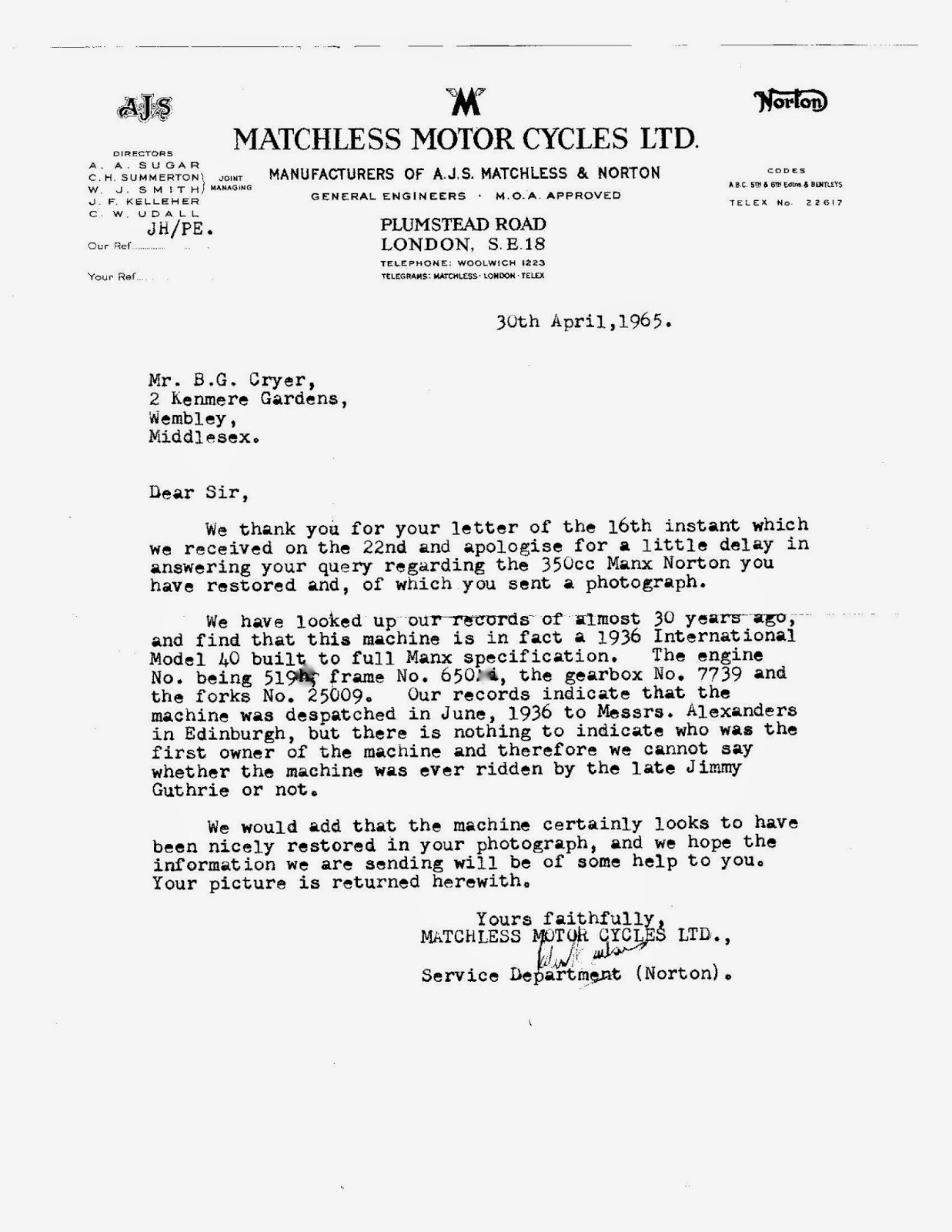 -SG- I have looked it up in the records and it indeed formed part of a small group of four Model 40s all of which are shown as being to “Manx Specification”. Two of them were despatched to Alexanders of Edinburgh, Paul's on 7/6/36 and the last of the four on 21/7/36. Of the other two, one went to the Dublin dealers Kelly's and the other to Ron Harris in Maidenhead. No purchasers' addresses are shown for any of them. It is my opinion that it is very unlikely Guthrie had anything to do with the bike as by 1936 he was a fully fledged works rider and despite being a Scot would not have been sent a works bike via Alexanders!  Besides which he and his brother ran a garage in Hawick and indeed bought a few bikes for their local customers. I am told the Manx Spec. description relates to the Manx Grand Prix specifically - Nortons and the other makers of racing bikes nearly all produced a limited number of rather special Manx spec. bikes for favoured dealers/riders as a rather cheating way of getting round the Manx GP regulations which did not allow riders to use 'proper' works models. The Manx spec bikes probably shared various features with the works bikes or of those of the year before - all's fair in love and motorcycle racing!

Your bike being shipped on 7/6/36 might possibly have been for a trade supported rider entered by Alexanders in the TT - you might get some clues if you have a look through the 1936 TT Numbers and preceding TT Notes and News articles - but just as likely it and the second one were used by Alexanders' riders in the '36 Manx.  Study of the relevant articles in M/Cycle/Cycling and the TT Special might give you a clue! 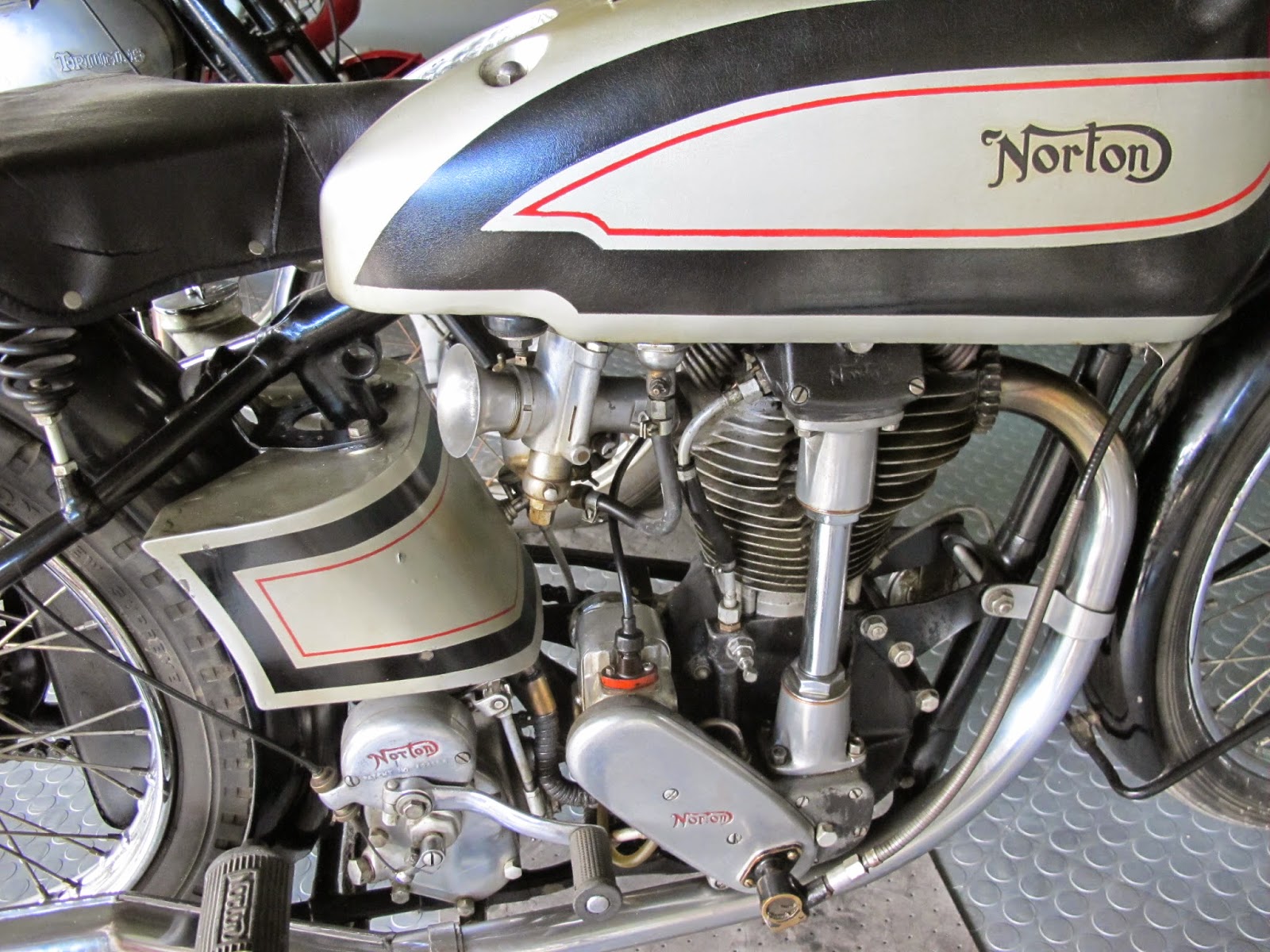 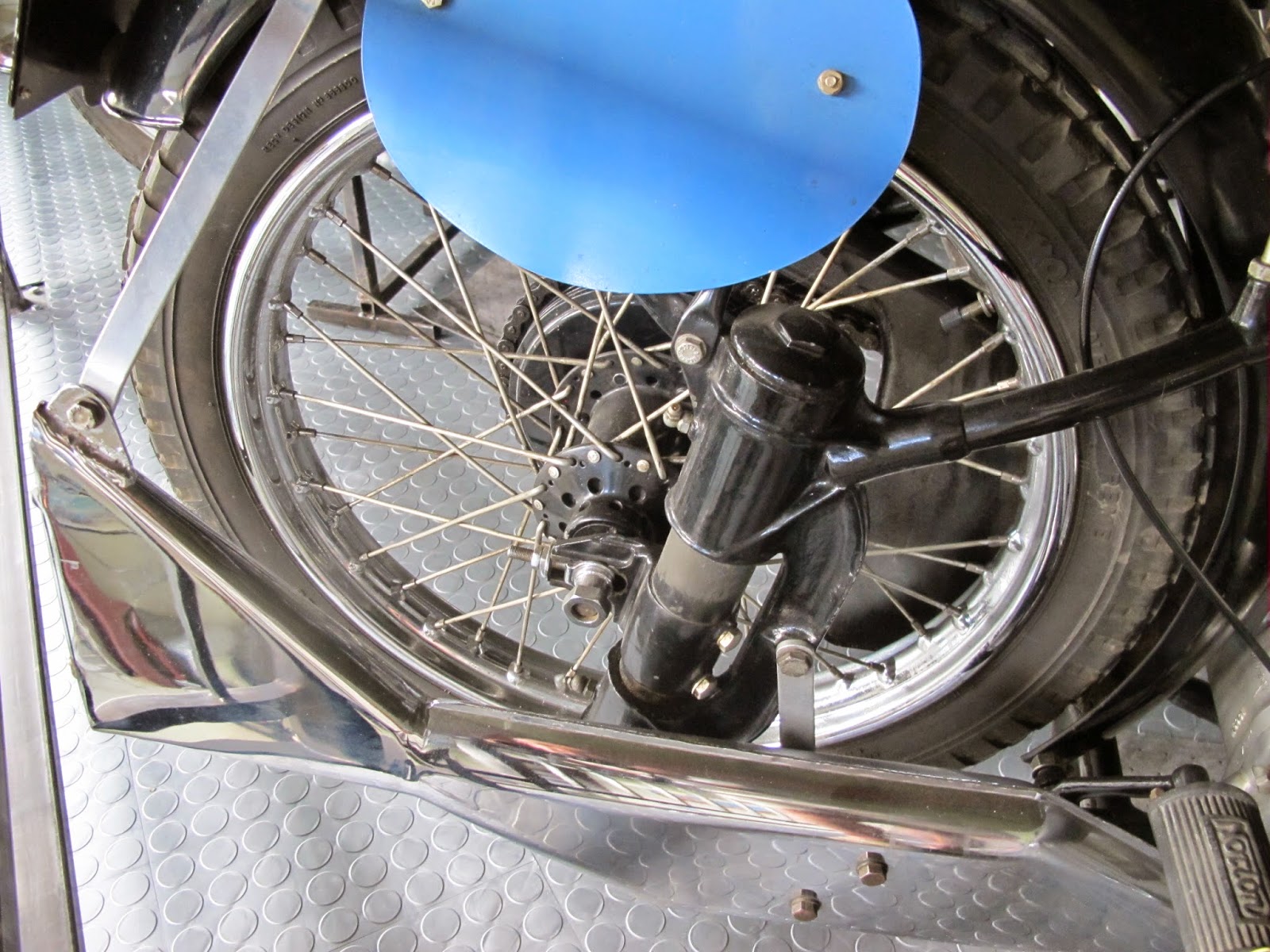 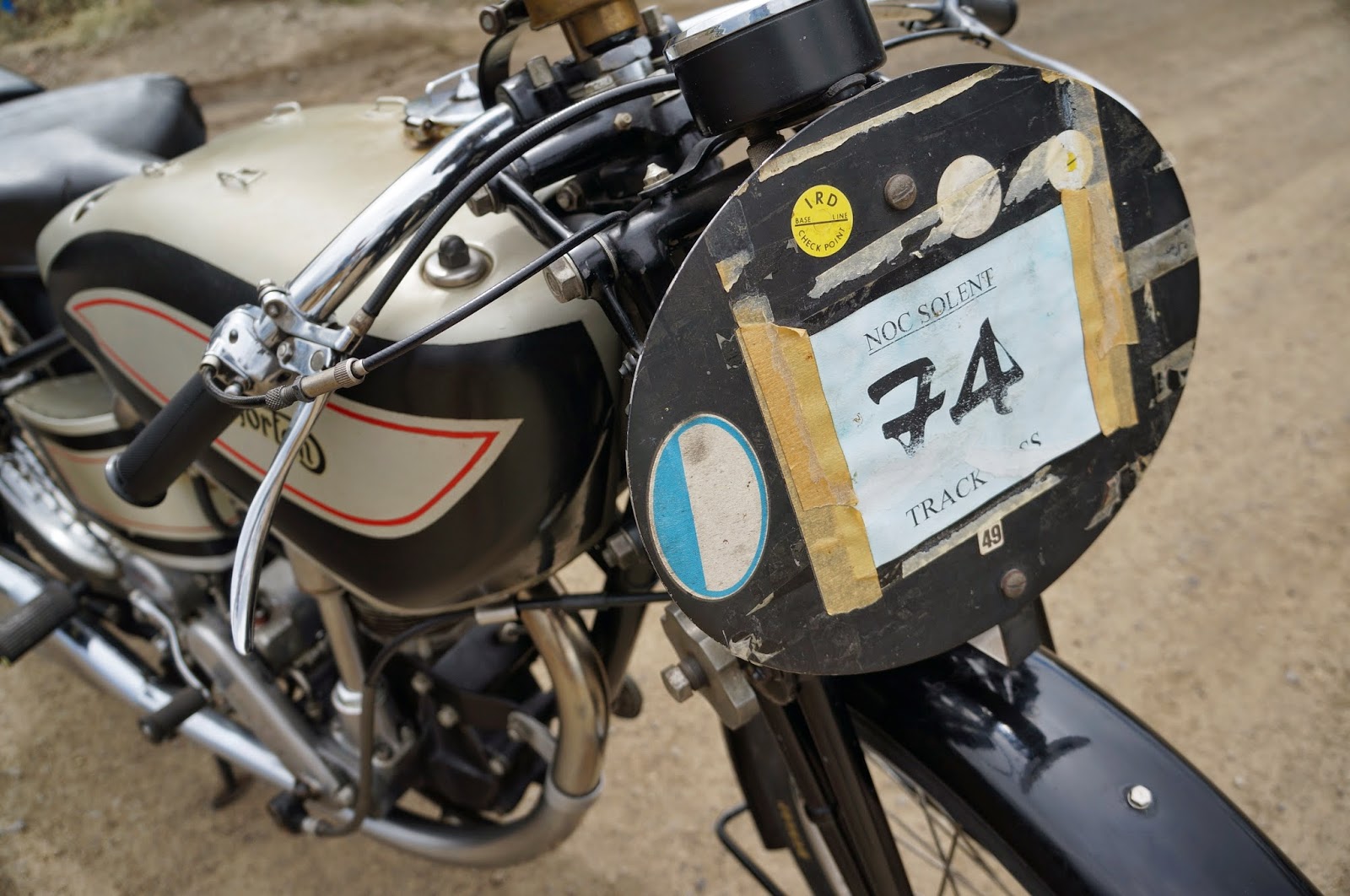 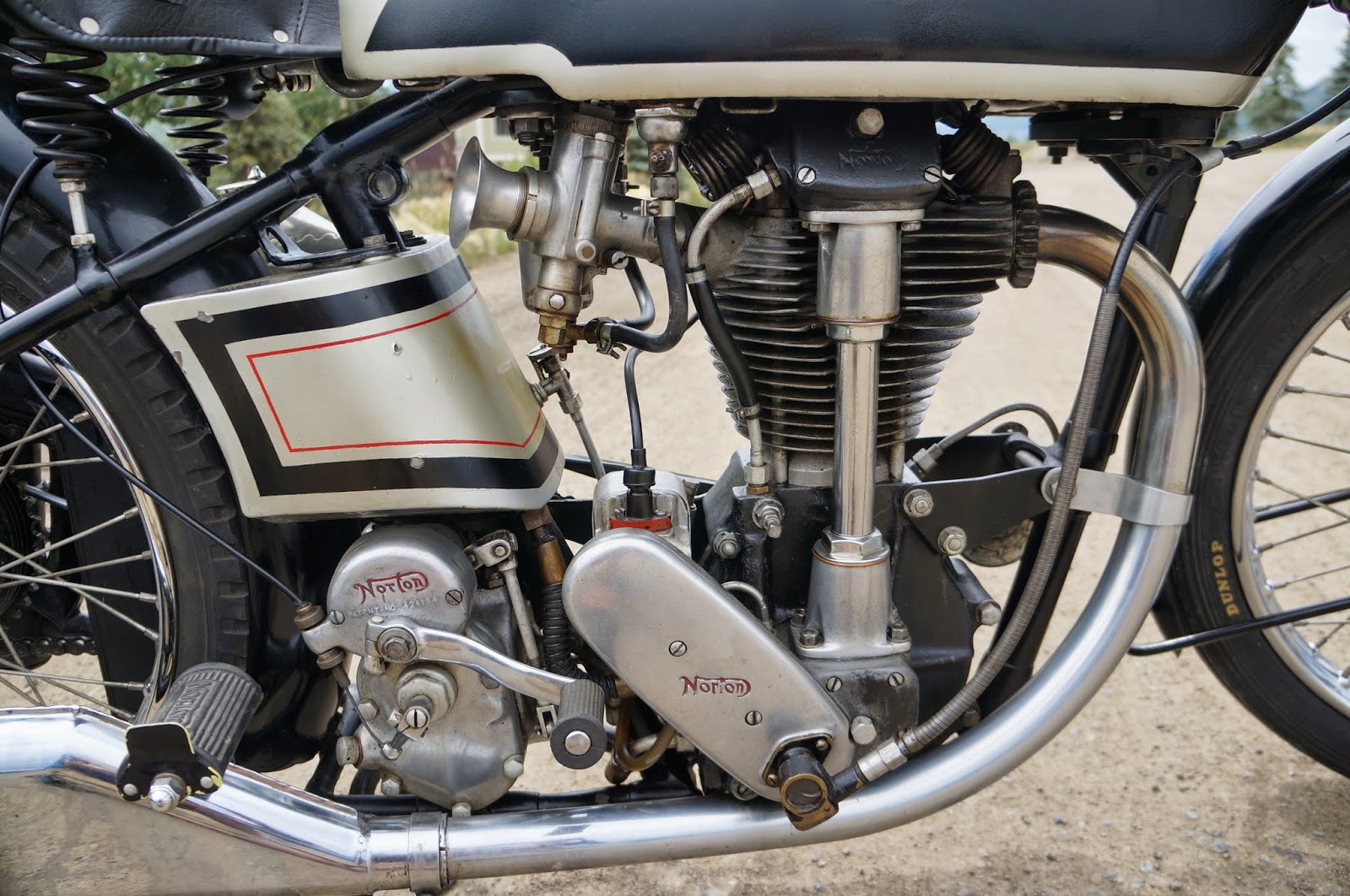 -Richard- Cryer owned this bike until the 1980s when he died unexpectedly at a relatively early age. He was living in Reading (U.K.) at the time and the bike was then owned by another Norton enthusiast from Reading named Tony Jamieson who later sold it through Atlantic Motorcycles of Twyford.

At first look the bike appears to be a 1938 racing specification International, but the records do not agree with this. This is why I think Mr Cryer thought it was perhaps a works machine. My best judgement is that it was a 1936 racing spec. Inter' which would have had a rigid frame. The bike was most likely returned to Nortons in 1937/8 for up-dating and a new spring frame. This was in an era when a motorcycle did not have identity as we would think of today and the new frame would have been stamped up with the old frame number. Looking at the pictures the frame is a 1938 racing frame fitted with road type side damper forks and racing check springs. The engine and gearbox look to be the original 1936 items but with a later rev. counter timing cover. The front wheel is the original 1936  racing 7" item and the rear is 1938 spring frame type which is different to the rigid. The tanks have been changed at some time, the oil tank being wider than it was as standard and the petrol tank looks to be a steel welded bolt-through type which was first used in 1948 on Manx Nortons. 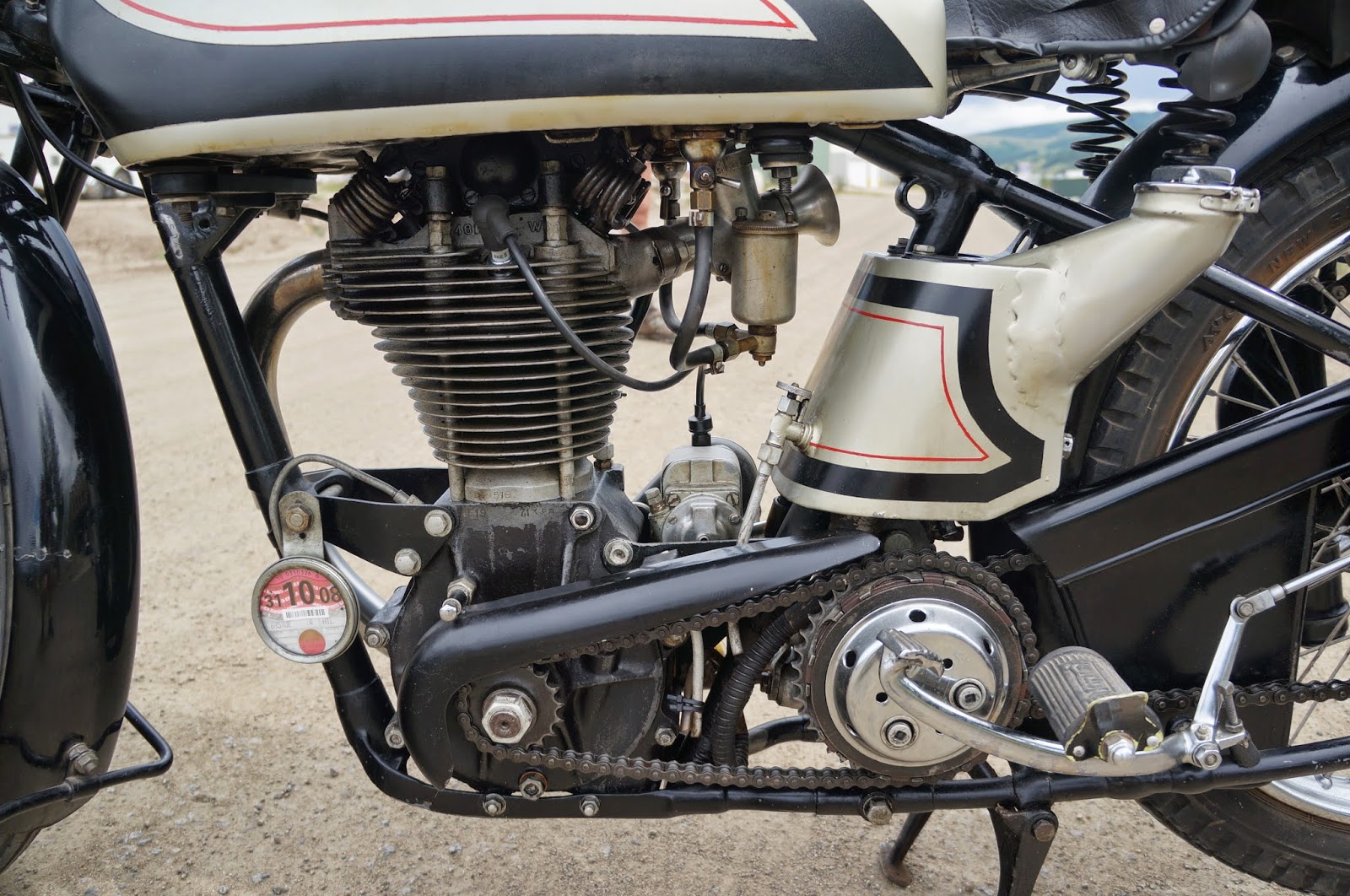 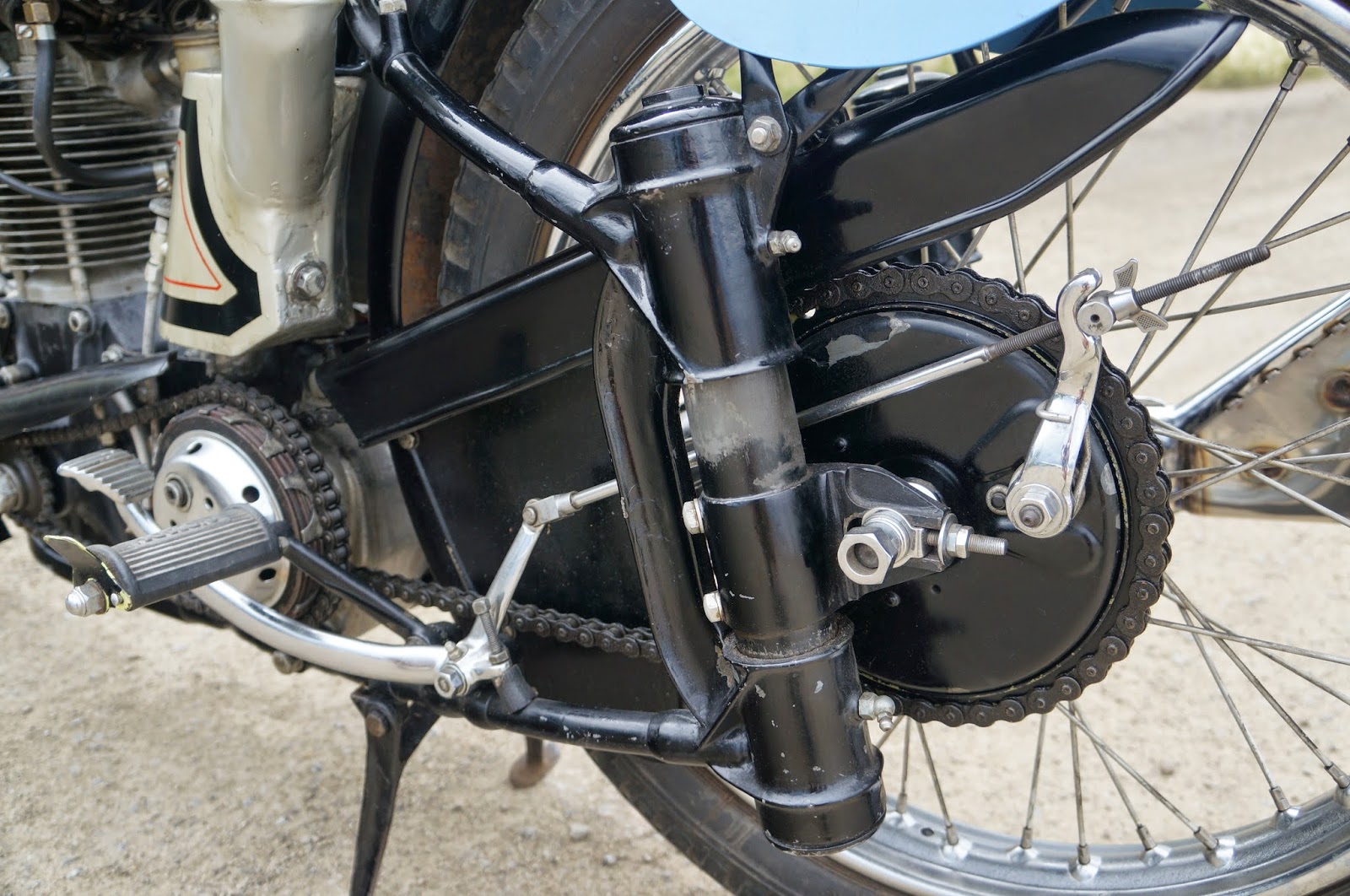 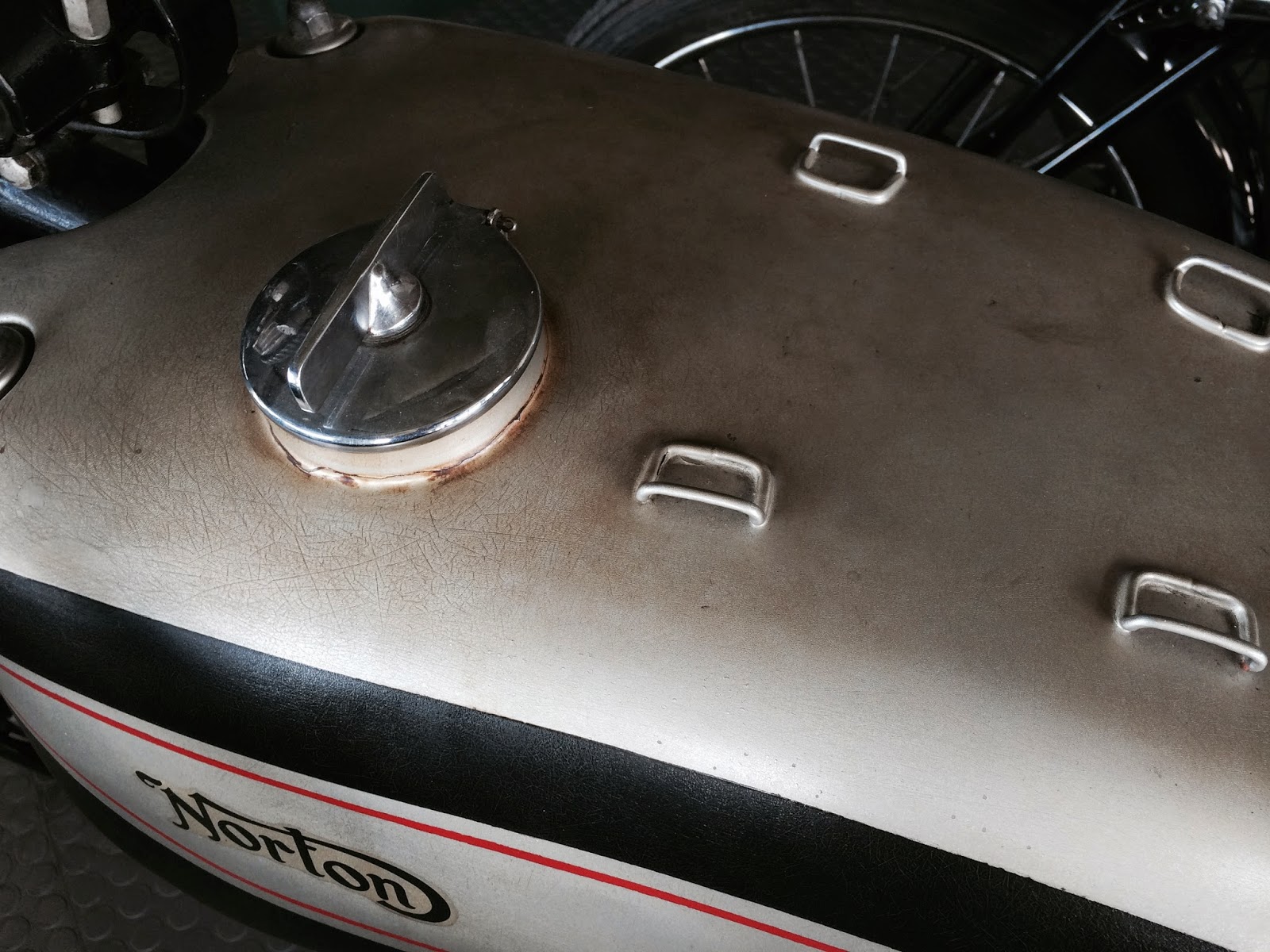 -Paul- A couple of comments: the only reference to Jimmy Guthrie comes in the letter replying to Barry Cryer. For Barry to ask that specific question I can guess he inherited that as an opinion or rumour from the prior owner. Far more likely than this being a fact, I'd suggest that creative marketing was alive and well in the mid 60's just as it is today, though at twenty pounds Barry didn't look to pay much of a premium for the provenance!

Much as we'd all like to stumble on an ex-works bike, that was never my expectation, and just knowing that the bike's major components have been together since the 30's is fine with me. The question of whether the frame dates from '36 or '38 seems to revolve around the factory records describing the bike in '36 as being to "Manx specifiation". So soon after the works bikes ran with rear suspension, would a customer bike - even a rare and favored customer - have had that feature ... ? 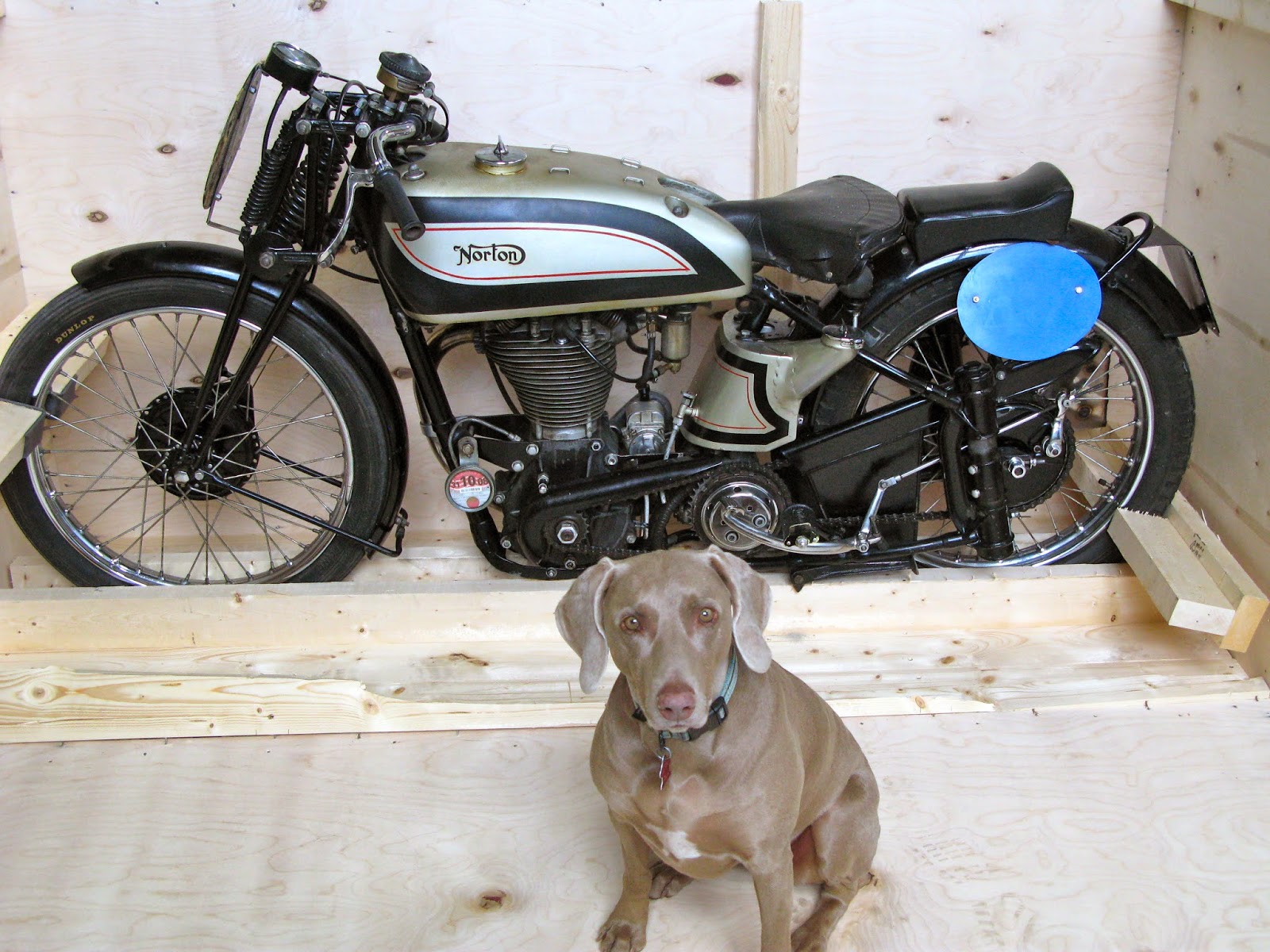