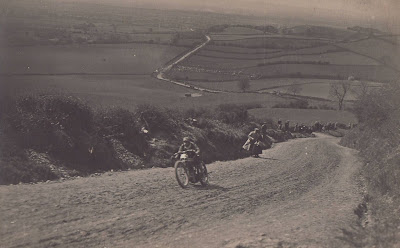 -Contributed by George- "Above is a picture, from Roger Cawthorne of his dad Ralph at Cronky Mona at the IoM; look at the condition of the road and the casual position of the spectators!"

-JdK- Clearly not the machine he entered for the Senior in 1922 or 1923; perhaps a practise lap on a side valve machine?

-Richard- I have responded to the post on "IoM Today". Our motor club newsletter editor received an email last year with a link to this post and a query asking if York M.C. organised hillclimbs. By pure coincidence in February an unconnected photographer took a shot of a rally car descending Sutton Bank near Thirsk in Yorkshire from almost exactly the same location as that of R.T. Cawthorne in the photo above! Mystery solved ...
Newer Post Older Post Home