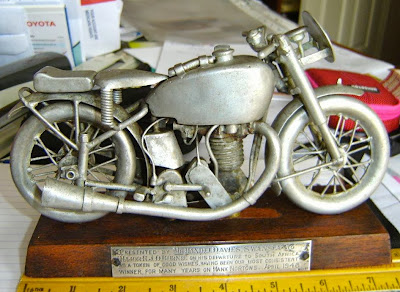 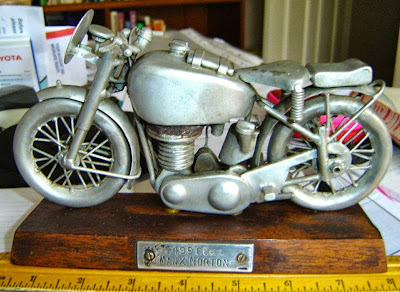 -From Peter in Australia- "I have a model 499cc Manx Norton motorcycle about 8 inches long by 4 inches high, mounted on a block of oak with an engraved plaque reading:

"Presented by Mr Handel Davies, Swansea to Major R J D Burnie on his departure to South Africa as a token of good wishes, having been our most consistent winner for many years on Manx Nortons... April 1948"

The item came into my possession in about mid 1980’s when I bought it with other items at an auction of unclaimed goods by police in Melbourne."

Interestingly, R J D Burnie featured on these pages before.

-Martin- R J D Burnie's Pendine history is well covered by Lynn Hughes in his excellent book "Pendine Races" published in 2000 by Gomer Press. Interestingly Handel Davies who presented this model Norton to Burnie was himself a prominent early competition rider both before and immediately after WW1 and Burnie's father Donald was also a prominent early rider.

R J D (but usually referred to as Bob) Burnie himself was a wealthy young man (he was employed as an accountant at Fort Dunlop in Birmingham) and could afford to indulge his love of motorcycle sport with the best machinery available, (ie Nortons!!) and ride for the fun of it rather than for pecuniary gain.  Although he had the opportunity to turn professional, he had no need of the rewards of racing being regarded as 'monied'. He was appointed as auditor to a new Dunlop factory in South Africa in 1948, which occasioned the presentation of the model Norton.

His first appearance at Pendine was in 1932 and he had many successes there through the 30s, perhaps best exemplified by the Welsh Hundred meeting held on Pendine Sands on Bank Holiday Monday 3 August 1936 where he won the 350cc one mile sprint, the 10 mile race for 350s, and both the main events, a 25mile race for machines up to 350cc  and the 50 mile race for up to 600cc machines, riding his 350cc and 490cc cammy Nortons.

The 'Pendine Races' book also covers the almost equally successful Norton rider L F Leslie Griffiths from Bridgend whose name has not yet cropped up on this blog.  He must be worth investigating as he had a long and successful career racing Nortons at Pendine and elsewhere from the late 20s till the early 50s!  Watch this space!!
Newer Post Older Post Home