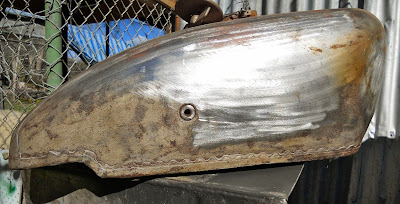 -SG- Ian from Australia has sent in a query about his 1937 racing spec. International Model 30. He says the factory records and his 1937 literature show the petrol tank was 'dull plated.' Does anyone actually KNOW what form of dull electroplating was used on the pre-war pie crust tanks? Was it nickel or chrome and if it changed during the decade from one to the other, when?

-Martin- I am almost 100% certain the process used was dull chrome plating. Chrome plating was introduced widely in the late 20s, and nickel was abandoned in favour of chrome across the industry save for a small number of eccentric companies who thought nickel the more attractive finish, notably Bugatti who stuck to nickel throughout the thirties.

Dull nickel plating was traditionally polished to give the effect we all recognise on veteran and vintage bikes, indeed the home nickel plating kits offered to restorers nowadays give a dull finish which can be polished if required or left dull. Dull chrome on the other hand is not normally polished, but left dull as its an attractive finish on parts which require the protection of plating but not the shiny finish obtained by bright chrome.

All the piecrust-edged tanks used by Nortons were constructed from soft-soldered tinplate, and could be chromed directly on top of the finished part without difficulty as dull chrome takes well to such surfaces. And dull plated parts do not need polishing before or after plating - polishing is difficult with soldered tanks as any Brough owner will tell you!!
Newer Post Older Post Home