The Norton Venture into Speedway - revisited

-SG- Some fifteen years back the VMCC published a short article I wrote entitled 'The Norton Venture into Speedway'. I am not proposing to put it on this site for the good and simple reason that in the intervening period more information about the DT Nortons has come to light and this would involve changing the article in several ways. There have been a few entries on the site already on this subject - see 6/5/2011, 8/7/2012 and 16/7/2012 - and so the purpose of this exercise is just to bring the available information up to date.

First, the numbers produced: with helpful input from Peter Roydhouse following my article, and my own researches, the overall picture looks like this:

So, apart from various special versions of regular machines - about which no details have come my way - it seems pretty certain that thirty six actual DT Nortons were produced during 1930, plus three spare engines, produced at the same time as the actual machines themselves. No details are available about the remainder. The machines themselves seem to have been particularly popular in New Zealand although the overall distribution was: 22 remaining in UK, 2 possibly going to NZ or Australia via UK Export merchants, 1 to the USA, 1 to France, 1 to Denmark, 1 to Holland and no less than 8 going to NZ direct along with the 3 spare engines.


Next, what did they look like? I have never seen a factory leaflet about them but the publicity photographs which appeared in the press at the time have been re-printed many times over the years and are included in this posting. From this, it is clear that the replica constructed in the UK back in the nineties was pretty close. Regrettably, it is just that - a replica, as the frame seems to have been constructed from a somewhat later Model 18 steering head and perhaps the rear half of a DT frame, while the engine is, apart from the short timing cover/magneto chain cover, a regular Model 20 from 1930. It seems that the publicity photos are of a prototype as the exhaust pipes are clearly secured to the head by the usual - for 1930 - internally threaded finned lock rings whereas the production DT versions had externally threaded hexagon rings and internal threads in the exhaust ports. Incidentally, the replica bike is currently in a collection in Scotland and was never run by the builder. As is to be expected with Dirt-track machines generally, the majority of the production DT models were supplied without brakes but one or two are shown as being fitted with a rear brake only.


I am indebted to Ken McIntosh for the photos of a DT Norton in action at the Tauwhare hill climb above, near Hamilton, just before the War: These show odd parts of the machine quite well although, as usual the rider's legs are in the way in some of the shots. He was a chap called Kip Harp, and he recorded fastest time of the day (FTD). 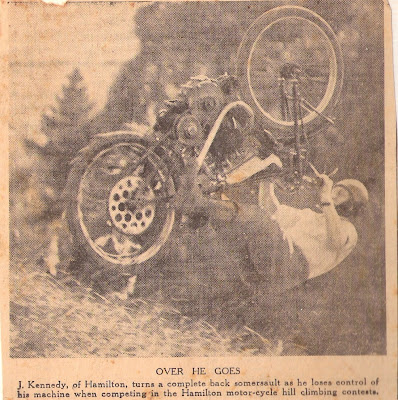 We also came across the actual photo used for the press report a short while later (above), showing an unlucky Mr J Kennedy looping his DT Norton at the same venue. There are a couple of photos of this mishap. It is a distinct possibility that the bike he was riding is the same as that used earlier. Finally Ken has a snap given to him by a possible subsequent owner many years later. This doesn't enlarge too well without losing clarity but some detail is evident (below).


As far as the overall technical details of the machine are concerned, the photos tell us that a racing Sturmey Archer LS gearbox was used, with a single spring clutch. The box had no internals other than those needed to carry the clutch and final drive sprocket as the DT Nortons were all single speed. 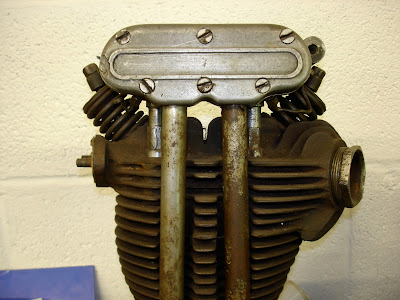 The engine - which looks superficially like a Model 20 twin port unit - was in fact considerably different. The crankcase does indeed appear to be a regular 1930 OHV version designed to accept flywheels with 22mm mainshafts but the flywheels themselves are steel and more akin to those used in the contemporary CS1 and ES2 engines and earlier Model 25s. The timing cover, on which is mounted the Best and Lloyd Mark V oil pump, contains cast in oil ways to provide a positive big-end feed (again, a Model 20 feature) while the timing cover and magneto chain cover are shorter than standard to provide clearance for the Webb speedway forks.

I can't be totally sure about which cams were used. The cams in the surviving engine in NZ tell us nothing as one is a standard - low lift - 1930 cam and the other looks like a Kiwi home brewed item with a very substantial lift and no identifying numbers. However not long ago I acquired a pair of cams reputedly from a DT engine and these are regular ES2 cams E2720/E2721. Compared to the usual 1930 cams, the E2720/E2721 cams have a much higher lift and it would not surprise me if they were fitted as standard to the DT engines. As regards the cam followers, information is also sparse but it seems possible - again from one follower in the same surviving engine -  that a slightly bigger radius on the follower foot was employed. 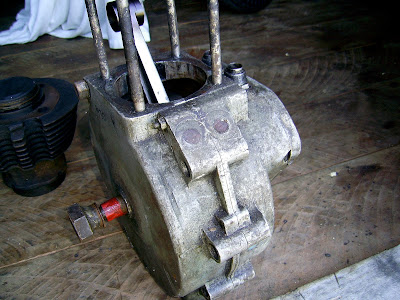 Moving 'upstairs,' the differences are much more apparent.  First, the barrel and head are held down with through bolts. Then there's a substantial spigot where head meets barrel (using Gardner engine experience?!), the exhaust pipes are held to the head by externally threaded rings,  and finally the twin float type 27 Amal carburettor is flange mounted. 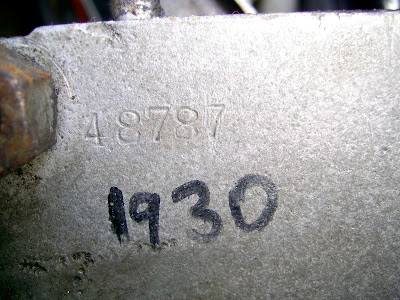 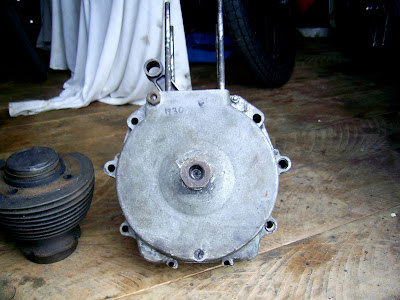 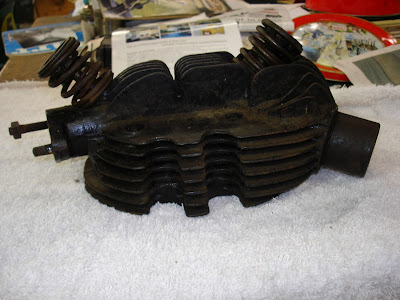 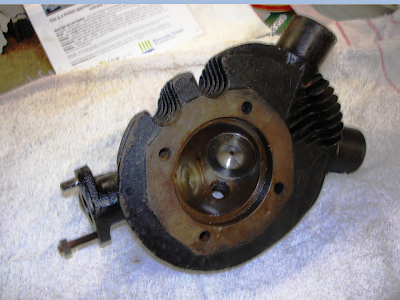 Survivors are few and far between. In Holland there's a complete machine which is up and running, which may or may not be original. Contact with the owner by John to ask for frame and engine numbers has been unsuccessful. I have seen a short Youtube film about it but it is difficult to see much detail. There is another complete machine - which came from Holland several years back - and this is in the Haynes Museum in Somerset (on loan I believe). This particular bike has a single port Model 18 head but does appear to have the correct bottom end.

There is the somewhat hacked about engine in NZ of which some of the photos are above, and there is a complete engine in Lancashire (further above). The owner of this engine has kindly taken a look inside the timing cover and reports E2720/E2721 cams (as ES2s) and followers which appear to be normal 1930 OHV type. If time permits, he says he may be able to investigate further which will be interesting. Although I know we have mentioned differing cam lifts before, it is perhaps just worth repeating that the E2720/2721 cams have a lift of 0.343" which compares to the standard 1930 OHV cam lift of 0.300." Quite a substantial difference!

Finally there may be yet another engine in existence belonging to a family in Dorset. I know of no others but this accounts only for four machines/engines so anyone else who has one or part of one, please let us know!
Newer Post Older Post Home