When is a Norton not a Norton?

-SG- When it’s an Ariel........... Back in the thirties, grass and sand racing and grass hill-climbs were popular motor cycle sports in New Zealand. A young man who came to prominence in the middle of the decade in the South Island was Nigel Newton – mounted on a 500cc Ariel he was extremely successful.... then calamity, a major engine blow-up meant he had to think again! And with help from the leading Christchurch Norton man of the day, Russ Lovegrove, a 1928/9 ES2 engine was shoe-horned into the Ariel, with a 1930 AJS oil pump on the timing chest. With typical Kiwi humour, it was christened the ‘Question-mark’. His successes continued until the outbreak of WW2 put a stop to such activities and sadly Nigel lost his life in the ensuing hostilities. 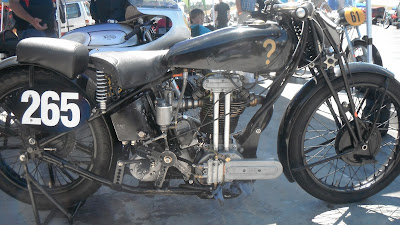 However, the bike went to a good home, being acquired by ‘Buster’ Brown who continued using it competitively after the war and it now belongs to Buster’s son Graeme. It is regularly campaigned in Classic racing events in New Zealand although it has been further developed and now sports 1930 crankcases/rocker gear and a home-cast bronze cylinder head. Lubrication is still attended to by the 1930 AJS oil pump. Running on methanol, it shows a very considerable turn of speed. 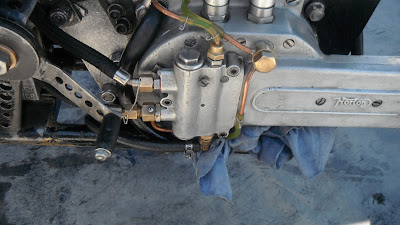 The color photos show the bike earlier this year, at the Hampton Downs Classic Race meeting.