-SG- Ian from Swindon in the UK has sent in this nice photo of his Grandfather and his 1929 CJ along with a copy of the original invoice from well known dealers, Laytons of Oxford. Family legend surrounding the bike is that it was an ex works machine and certainly quick, having got the better of T E Lawrence and his Brough Superior in an unofficial 'burn-up' down in Dorset. However the engine number given in Layton's invoice, when checked against the works records, shows it simply as a production CJ, delivered to Laytons in April 1929 and sold by them in July 1930 to Mr Williams. Ian would be very interested to hear from anyone who can add anything about the bike - like later owners of JO1044. (Thanks to Annice of the VMCC for double-checking this CJ against the Works Records) 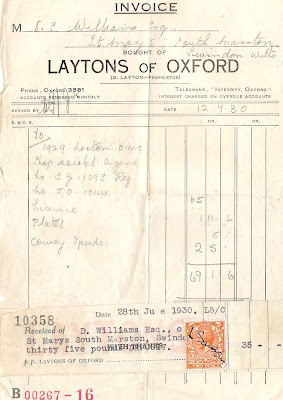