-SG- We recently had a posting on the site about the 'Question-Mark' - a successful Ariel-Norton racing special assembled in the mid thirties and still in use today. Strange to relate, New Zealand's South Island boasts another which was also put together in the thirties. Which one was first is unknown at this stage - was it a case of great minds think alike, perhaps? Anyway, current owner John has sent in a bit of history to go with the photos: 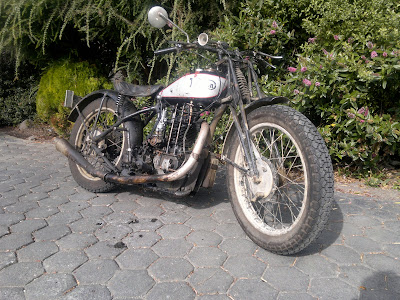 "This machine was built up somewhere in the mid '30s for racing purposes by my father and one of his three brothers (all good Norton men). Obviously this was a time when not too much money was around which is why many oddball parts have gone into its building. Hence it has been affectionately known as the 'Bitza' during its life. 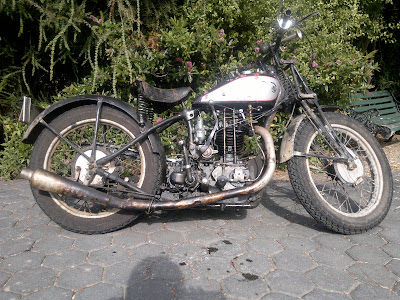 The motor is obviously late '20s OHV Norton, the petrol tank and frame almost certainly Ariel. Webb forks are fitted up front (again, late '20s). The gearbox is from a Harley Davidson and as for the rest of it, I have no idea. Magneto?? Suggestions welcomed on anything. Given the primary chain guard with I think a Morris Minor hubcap over the clutch, I wonder whether it may have seen some road use for a short time. 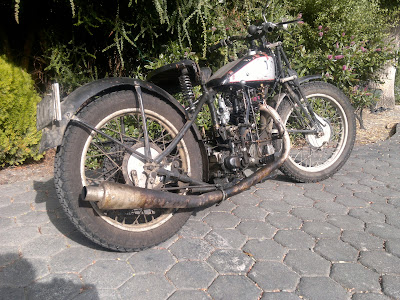 It had been lying about family garages for decades until I managed to purchase it about 9 years back, the deal being I would not wreck it for parts. No worries there. 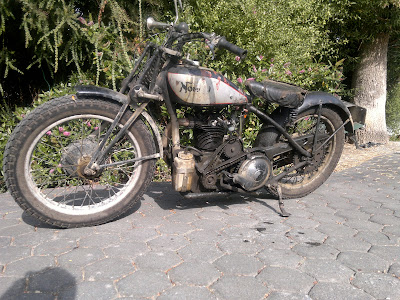 The motor was totally worn out and duly overhauled back to standard spec.. Wheel bearings, brakes etc. all got a check over and I fitted new tyres. The rest of it seemed quite functional. I have left it looking exactly as I brought it home (concentric carb excepted, but on a Bitza, does it matter?). When it gets an occasional outing, it certainly seems to draw an audience wherever it goes. Obviously it’s not a machine for the purist, but then it is a part of history and most seem to appreciate it as such. How does it go? Even in its now standard motor trim, it goes and runs very well and actually handles better than my standard 1928 Model 18. I don't think that tweak in the front downtube looks standard!"
Newer Post Older Post Home