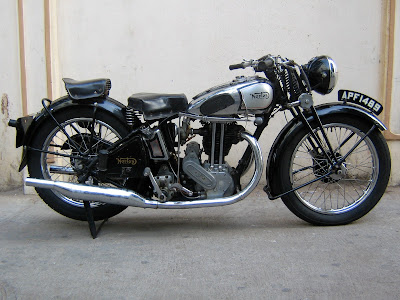 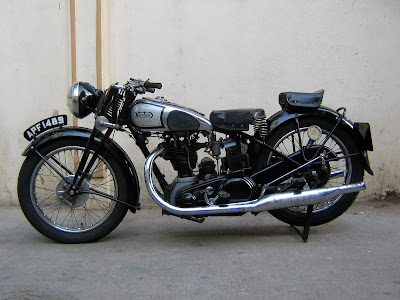 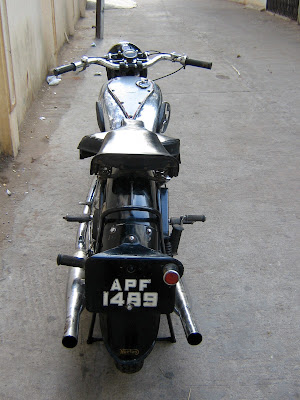 An email from Farhan in the US: I want your help regarding a 1935 Model 55 that my dad has owned for about 20 years now. It has a hand gear change system but I thought that it was phased out in favor of the foot gear change by 1935. Also it has the tank instrument panel space but no longer has the instruments. The bike is currently in India and was probably supplied to a motorcycle dealer there though I don't have any specific details.

-SG- Details are as follows: 1935 Model 55. 350cc. Engine number 32xx.  Frame number 541xx.  Magdyno number 15434. Gearbox number 13888. Forks number 12979. In the Extras column the comments are given: Dyno., Gate change, Panel, Carrier etc.  (the panel reference refers to the tank top instrument panel). Date of despatch is 25 Sept 1934 and the purchaser is shown as Hales (Sohrab). The firm of Hales would probably have been an Export Merchant in UK. The bike immediately preceding this one - another Model 55-  was also shipped to the same company on  the same date. Despite the introduction of the upright Norton gearbox in 1935 this gearbox was a Sturmey Archer four speed, but probably with the Norton clutch fitted.

-David- All the gate change parts still appear in my 1938 photocopy parts list. I know it’s 1938 because it has a photo of the infamous ‘cow’s udder’ silencer box. Norton parts lists never seem to carry a date, but the silencer dates it exactly. This list does not seem to contain parts for earlier bikes (e.g. older silencers) so that suggests the gate change was still an option.

-Farhan- I spoke to my dad and he told me "Sohrab" would refer to the Sohrab Brothers Norton dealership in his home town which back in 1935 would have been Hyderabad State, British India. My dad tells me that they used to be Norton Dealers, then Yamaha and finally Rajdoot until they closed down about 5 years ago in the city of Hyderabad, Andhra Pradesh, India. The bike is still in Hyderabad, India at our home there and my father bought it from the son of the previous owner (possibly 1st owner). It is nice to know the history of the bike and that it has remained in the same city for so long.
Newer Post Older Post Home