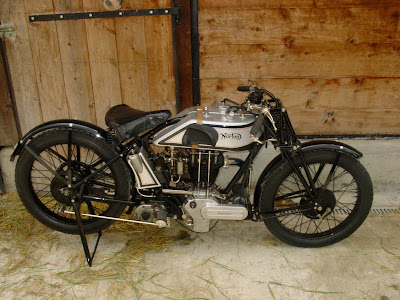 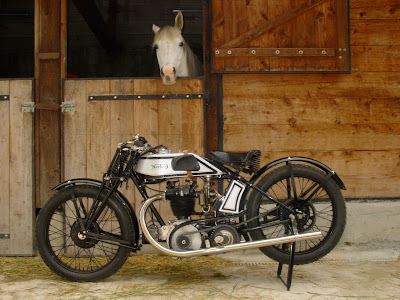 These photos were sent by the owner of this Model 25 (that featured on these pages before). This is the story of this machine in the owner's words:

-SG- This Model 25 has original frame and engine numbers. It was originally fitted with a Brown and Barlow carburetter, 26 x 3 tyres (Beaded edge), Gearbox 91897, TT Webb forks, foot-oiling pedal and the TT Pannier tanks. It was originally shipped to M. Psalty in Paris on 26th January 1927.

This is a good restoration and there are a few points worth making: the original foot operated oil pump pedal, mentioned in the despatch book, seems to be missing although the triangular plate for the cable stop on the front upper gearbox end cover studs is still there. The front brake is standard Horton 7 inch and not the Enfield 8 inch which was the norm for Model 25s. Both wheels still have the 26 x 3 beaded edged tyres. I think the carb is now a TT Amac. The slightly later Andre steering damper - or damper knob - is fitted. The saddle cover looks to be original or at any rate 'vintage!'

Interesting that the rear brake arm is PUSHED rather than PULLED. This is exactly the same as John's Model 25 (and this one, and this one). Although not totally conclusive, I am beginning to think that this may have been the standard arrangement for Model 25s with CS gearboxes fitted while for those with LS  racing boxes the brake arm was PULLED. Actually I don't think the pushing arrangement is a good idea as there must be a tendency for the brake connecting rod to flex under heavy pedal pressure.
Newer Post Older Post Home