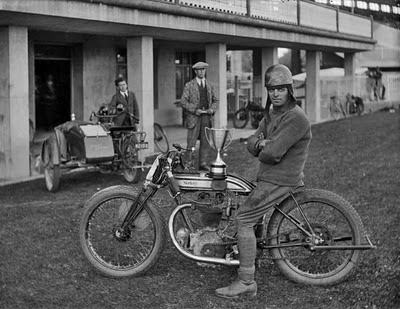 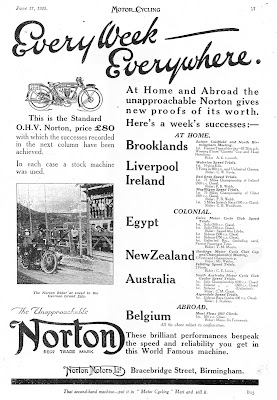 -SG- The posting for 17/4/2010 shows a 1925 Model 18 in decidedly sporting trim with rear brake removed and open pipe (reproduced above). While the date is correct, it has now been revealed that the caption was not. The chap on the bike is Noel Webby of Blenheim in New Zealand and the occasion, winning various events (three firsts and Championship) at the Hastings Motor Cycle Club event, probably in June 1925.

I am indebted to Peter Thomson of Thomson Motorcycle Museum, near Palmerston North in NZ, for the above information and for the attached Norton advert from Motor Cycling, which mentions Mr. Webby’s successful ‘day at the races’. Peter is a Harley expert, as well as having a wonderful collection of interesting machines and a vast and comprehensive archive. He has identified the outfit in the back-ground as a 1925 Harley with registration number expiring in June 1926.

As mentioned in other posts, grass racing in NZ was, at the time, carried out on horse racing tracks and racing on cinder tracks had not yet appeared on the motor cycle sporting scene.

At the time the photo was taken  Noel worked and raced bikes for Alan Woodman who had a motorcycle shop in Blenheim.  Why, on this particular occasion, Noel was riding a Norton is unclear as he was usually riding one of Alan Woodman's specials which were all called 'Excuse Me.'  Alan himself - though not noted for any Norton connections - was a man of great character.  He lost a leg in practise for the 1911 TT but, nothing daunted, returned to NZ to pursue a very successful career racing motor-cycles and, later, speed boats.
Newer Post Older Post Home