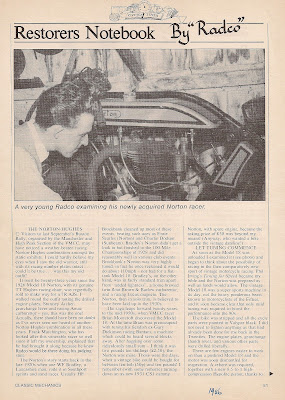 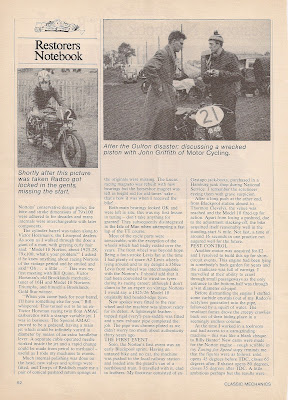 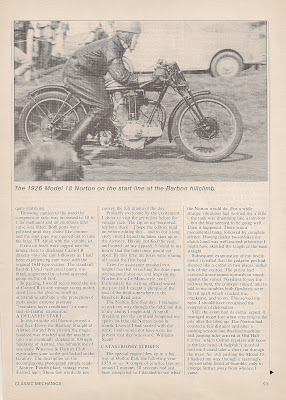 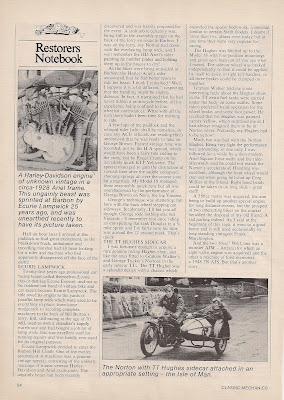 (to download a larger version of these pages; position pointer over picture, right mouse click and choose 'open in new screen' or similar)


-SG- Those with a long term interest in Vintage bikes will probably have come across articles by ‘RADCO’ which appeared in various publications over several years. The long series on re-building and re-furbishing the machines of yesteryear which appeared in the Vintage Motor Cycle Club’s monthly magazine from 1982 to 1989 later appeared in book form as the Vintage Motor Cyclist’s Workshop. I can recommend this volume which has been out of print for some years but which may be re-issued soon.

Although Frank Farrington (alias RADCO) re-built many machines over the years, during the late fifties/early sixties he owned and used to good effect in Vintage races, Hill-climbs and on the road, a mid-twenties Model 18. This he had obtained in a somewhat sad state from an enthusiast in Lancashire for the princely sum of £7.50. It had been languishing in the original owner’s coal shed for over thirty years. Once re-built, he applied to his local tax authority for a registration number for it and after some discussions with a friendly clerk, was granted – so he told me – the registration number B49.

Frank was bitten by the Vintage racing bug and by the time he had finished with it, B49 was a flyer and was one of the few Vintage machines (at the time there was no class for post-vintage bikes in speed events) to be timed at well over 100 mph. Its performance was undoubtedly aided by Frank’s home brewed cams which gave valve timing very close to that of a Speedway JAP, as well as polished internals, larger valves and a high compression piston.

With the passage of time, Frank moved on to other machines and the Norton was sold, together with the very nice TT Hughes sidecar which was attached to it from time to time. I am glad to say the outfit still exists and appears from time to time albeit no longer in its state of racing tune and without its desirable and valuable number plate! Frank died a few months back aged 77 and these few lines are written as a tribute to a real Vintage enthusiast. I hope he would take as a compliment the reproduction on this site of his entertaining Norton anecdote from Classic Mechanics.
Newer Post Older Post Home