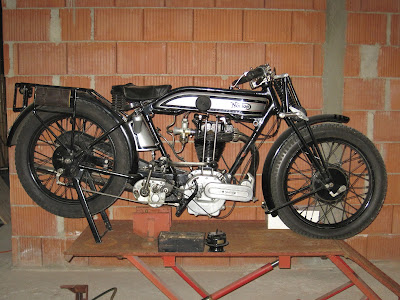 -SG- The bike seems to be a mixture of parts but actually looks quite correct for a 1928 Model 19 apart from the brake pedal on the right hand side. The engine number ES419XX is correct for an entry showing a 588cc ES2 engine (an engine only) shipped to the Swedish Norton agents, Per Nystrom in November 1928. Photos of the internals of the timing chest show ES2 cam followers and the W7 (Model 18/19/16H/etc) cams; normal ES2 cams have a much smaller base circle diameter. I guess someone has simply put Model 18 cams into the ES2 engine and put a standard (pre-1930) outer cover onto the timing chest taking - note - the 1928/1929 oil pump, so that it could be used in the flat tank frame with magneto out front. The head is ES2 as it has a left handed exhaust port and ES2 exhaust valve lifter mechanism. The 588 flat tank frames like this one have 588 stamped on the right hand side of the saddle lug and the frame number on the left hand side. 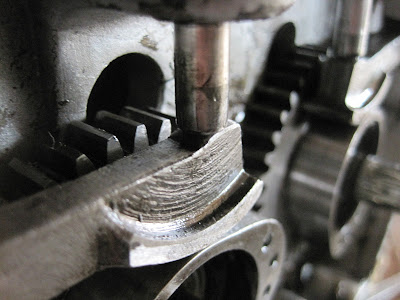 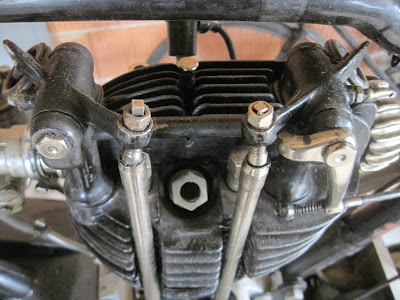 Interesting to see the unusual Bowden steering damper (below): looks complex and not seen one before. They did not sell as well as the Andre dampers usually fitted to Nortons. 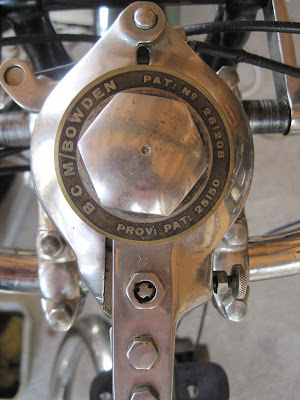 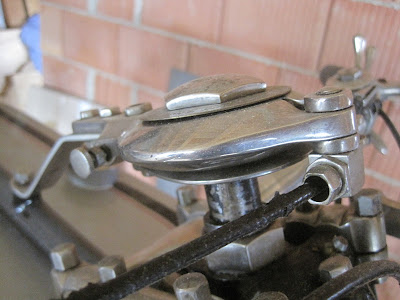 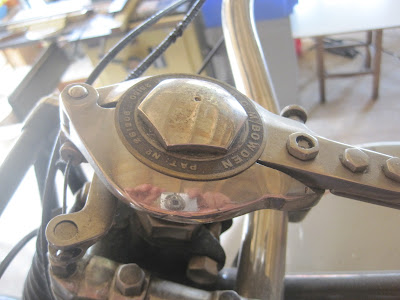 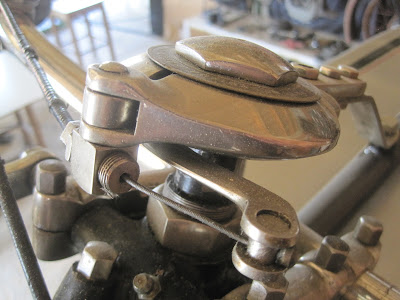 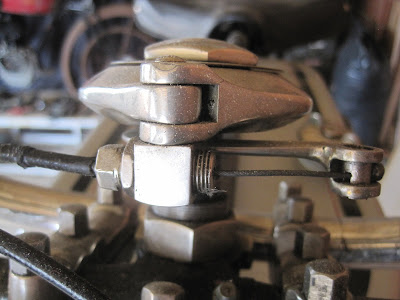 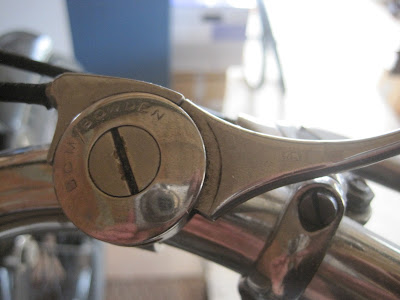 -Martin- This Bowden steering damper was used extensively on works Rudges and the principal feature which distinguishes it from others is that it is remotely operated by a cable that allow the rider to adjust the damping effect without removing either hand from the handlebars. I think this tells you something about the handling of Rudges more than about the benefits of the Bowden steering damper. To quote from the delightful 'Rudge Book of the Road' published in 1927, in a chapter headed 'The TT from the Saddle', '... you plunge down to Craig-ny-bar. Machine ahead of you. Can you pass him? Prudence says NO. He's jumping about all over the road - wrestling with occasional bursts of speed wobble. So are you! If you try to pass you'll either hit him or go up the bank'. I think I would rather be riding a Norton!! 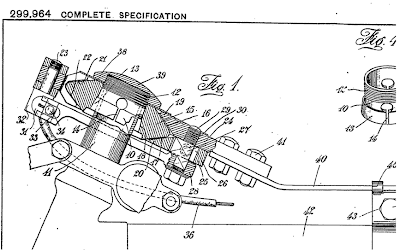 -Roger- Attached (click this link for a PDF) is the patent explaining how the Bowden steering damper works and which gives the correct application number together with the dates. The application was made in September 1927 and granted in November 1928. The plate on the damper therefore indicates that it was made between these dates and so was probably fitted from new.
Newer Post Older Post Home