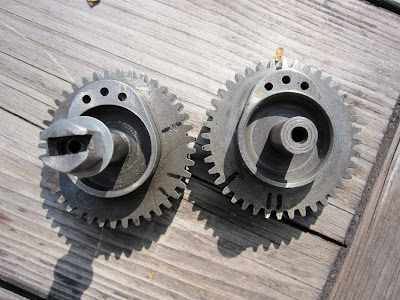 Norton literature states that Norton used cams marked "90" in the early part of the 1920s. During the 1926 season a different type of cam was standardized on all models and these were marked "W7" (above).

As with many things, there seems to have been exceptions. A pair of "90" cams has been found in a 1929 side valve engine and the inlet had the usual oil pump drive slot which appeared to be entirely correct in form and dimensions; inlet cam driven oil pumps were introduced in 1928, and although one engine is flimsy evidence, the factory may have fitted "90" cams for much longer than stated in the literature. 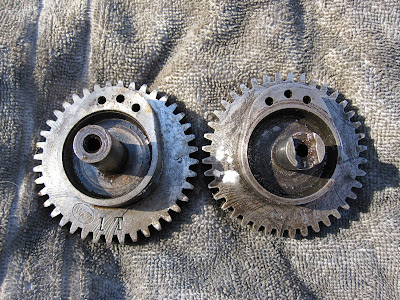 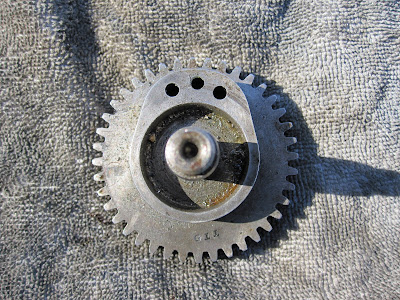 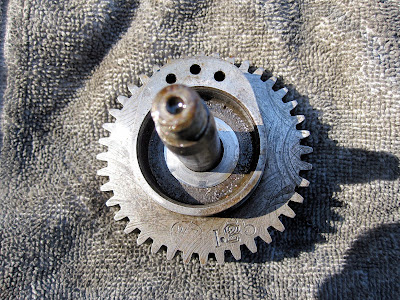 Racing OHV Nortons used a different cam profile that resulted in much longer valve openings and overlap. The racing cams for the Model 18s up to and inclusive the 1929 models were stamped "IT" although some have different stampings on them - "TTG" or "1.25" (above). The "TTG" form seems to be identical to the "1.25" and has a slightly longer opening than the "IT".

The "TTG" and "1.25" cams in the pictures above are the exhaust ones. The "TTG" cam came from a 1925 TT engine and we do not know whether the inlet cam which went with it (missing by the time Simon acquired the engine) was also stamped "TTG". The fitting of racing cams, as a non standard feature, usually seems to have been mentioned in the relevant section of the despatch records.