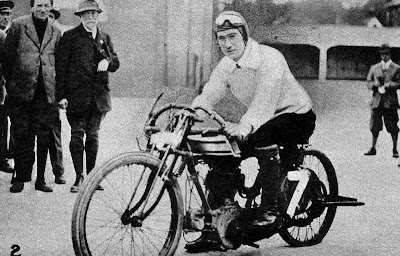 By Roger. Here is a nice picture of Vic Horsman (in the background are Pa Norton and Don) on a very skimpy Norton on which he took three worlds records including the hour. The record was taken on 11 September 1920 at Brooklands from Jack Emmerson's ABC. The background in the photo is not Brooklands and probably the Norton factory which would explain Pa's presence. Don was racing manager for the Norton works in 1920 so that is why he was there. Joe Bailey's marvelous book has a picture of the same machine, but at Brooklands, with the description that states that it was a single gear belt drive Norton which it is not; it's an all chain drive Model 16H. The gearlever can be seen in this photo.
Newer Post Older Post Home