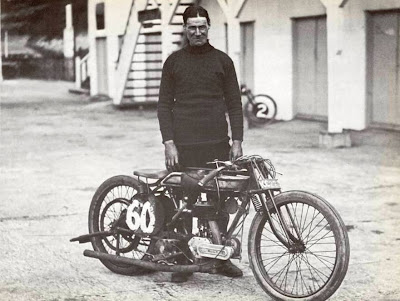 Victor Horsman and his 16H Norton after winning the 500 Miles Race at Brooklands, 2 july 1921; note that this 1921 machine has a gearbox and all-chain drive.

Horsman was one of the great tuner-riders of his time, winning races and breaking records, first on Norton and then on Triumph machines. He never did forget his Nortons though, see what Titch Allen writes about him in The Story of the Norton;

"After failing to get far with their Ricardo design, Triumph called in a practical tuner, Victor Horsman. Horsman, well versed in Brooklands lore and with an intimate knowledge of Nortons, had scrapped the Ricardo four-valve design and come up with a two-valve head. Already his reworked engines had gone very well at Brooklands, in fact they had put it across the Nortons. Which was not altogether surprising for the bottom end of the Horman Triumphs, as seen on Brooklands and in the Island, were remarkably like Nortons. There were unkind people who said they were Nortons but that was not fair although the idea of running the push rods straight down to the internal cam followers without intervening tappets was pure Norton."
Newer Post Older Post Home