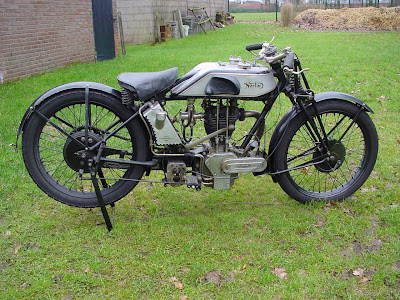 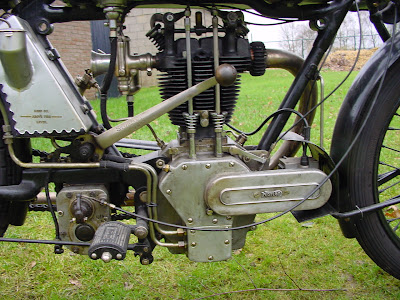 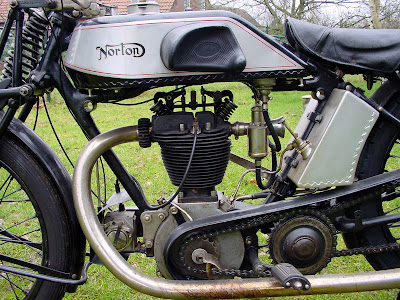 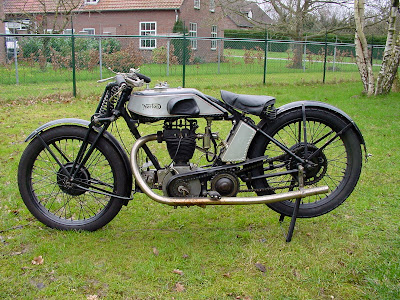 -SG- This bike was once owned by Stefan Knittel and he told me in 2008 that when he got it in 1980, it was a Model 18. It was fitted with a one piece 'look alike pannier' tank but after a while, Titch Allen sold him a proper pair which in my view are on the bike now - from the photos thereof, they look genuine. The frame is for sure Model 18.

Despite the crankcase showing 79x120, the engine is now a 490cc unit. Stefan bought the engine now in it from Lancashire collector Eric Biddle and says that it was already a 490cc unit when he got it. What is unclear is whether this engine started life as a dry sump unit or not. Only taking it apart to check the internal numbers would confirm this. Possibly, it is drive side case from the 588 engine 39497 coupled up to a timing side from a Model 21 or 25. In the records, engine number 39497 is shown as being part of a Model 19 (no mention of it being dry sump incidentally) supplied, fitted with panner tanks, in August '28 to J W Shaw but in brackets it says (for de Gourley). It also says 'Tuned for the Ulster.'

De Gourley was an Irishman who I think rode on a few occasions in the Ulster - indeed he won the Unlimited Class in 1927 - but I don't have any more info about him. He seems to have ridden in the over 500 class and the date of despatch of the bike fitted with this engine would have been in nice time for the Ulster but he did not finish for some reason or another.

The gearbox in the bike now is not the one fitted to de Gourley's machine (different number) although it is a racing box or at least a racing shell. The wheel rims on the bike now are worth mentioning - these are the first of the wired-on rims - not quite the same shape as we are used to.

Back to the bike details as first acquired by Stefan - he gave the engine and frame numbers as 33233 and 26559.  These numbers match and the bike was a standard Model 18 supplied to Pike's of Plymouth in Jan 1927.

So basically it seems to be another replica Model 25 though quite tidy. Oil tank not very good. Also worth mentioning - the 588 engine will only fit with difficulty into a Model 18 frame and this is certainly not a 588 frame.
Newer Post Older Post Home