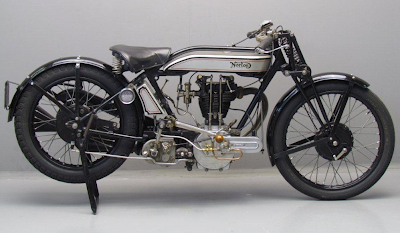 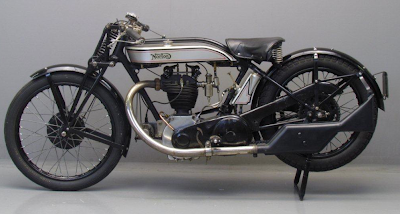 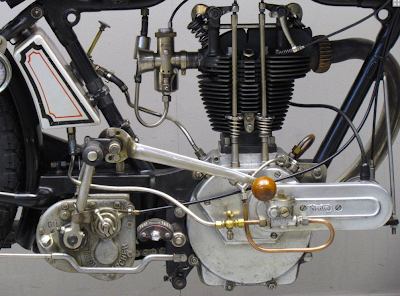 -SG- The fuel tank is surely a replica and seems slightly wrong shape at front.  Oil tank - if original - is earlier than 1927.  The B and B carb has no air slide and weird trumpet on it.  Clutch cover on primary chain case is wrong.  Cylinder head has 1929 type exhaust valve lifter mechanism. Sporty mudguards look quite nice but marred by mudguard stays being a bit wide.  Front wheel looks to be 1930s Inter and front forks may be 1930s Norton though correct Webb links and dampers for 1927 are fitted.

Paul from Australia has pointed out a very relevant feature relating to this bike: the head appears to be a 1930 type (note fin shape and size of cutaways, which are large enough to clear pushrod-tubes). Some years ago now, the late Bob Mosdell of Maidenhead had a head like this on his 1930 ES2, which at the time, had an open push-rod engine in it. Regrettably I can't remember if the two bosses on which the rocker standards are mounted were present in the head casting he used or if he had to do some modifications to make it all work.....