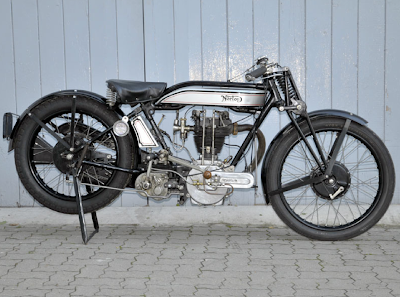 Coming up for sale SOLD at H and H auctions; a 1927 Model 18 Norton described as follows: "This example dating from the latter half of the twenties is described as being in good condition mechanically having recently benefited from an engine rebuild. The cylinder was rebored and a new piston fitted at the time and the engine will require running in. The machines cosmetic condition reflects its mechanical condition with the paintwork and brightwork being described as "good". It is offered with a Swansea V5C on which the year of manufacture is declared as being 1927."


It looks to be in fair condition; replacement mudguards and brackets have been fitted and the front wheel may be 21"; the front break plate is from a later model.