The Fowler Fiasco - or the 'NOT FOWLER' TT Norton

-SG- Bonhams' recent and in my view, rather feeble protestations about the 1926 588cc side-car outfit linked to Phil Pike reminded me of a long running and rather ill humoured (on both sides!) exchange of messages I had a couple of years back with the top dog at the National Motorcycle Museum (NMM), Simon Hartland. These related to the machine which has been touted by the museum and many others as the actual bike on which Rem Fowler (above) won the multi cylinder class of the inaugural 1907 TT. Despite my perhaps pompous suggestion that they owed it to their visitors to label their exhibits accurately, the NMM people refused to accept written evidence provided to them which shows clearly that the machine was nothing but a fake. It was assembled in the early fifties from parts garnered from the south of England, by an enterprising back street dealer in Maidstone called Percy Webb (third pic from above). I am aware that the machine was another casualty of the NMM fire (below) and has been skilfully rebuilt by Dr J C (George) Cohen who also subscribes to the view that it is original - seemingly on the basis that Titch Allen once stated that it might be. (Photos above and below taken from Cohen's website)


Percy sold the bike to John Griffith - at the time a journalist on 'Motor Cycling.' John unearthed Rem Fowler and the whole sorry affair has rumbled on from there. It would take too much space to re-produce everything in my large file on this matter but a few excerpts are attached. 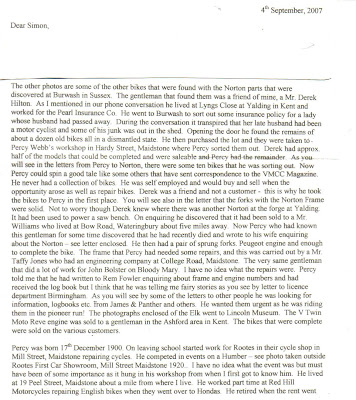 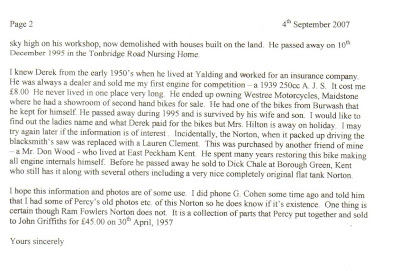 The first (above) relates how the bike was assembled in the first place by Percy. I have removed the writer's name and address, although he gave me permission to sent his letter 'as is' to Simon Hartland. 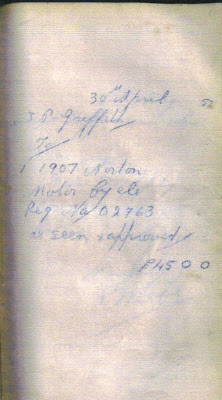 The second (above) shows a copy of the receipt Percy gave John G for the bike. This is one of many carbon copies from the duplicate book Percy used for his correspondence. Other copies show he wrote to the licensing authorities and managed to get back the reg. number O2763, and that he had noticed that the tank on the actual 1907 bike was a good deal deeper than the one he had acquired (in a letter to Nortons). 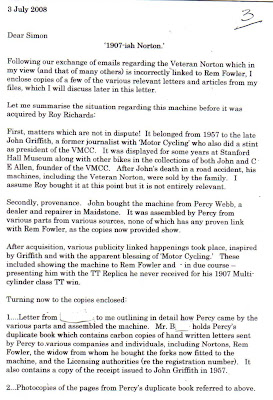 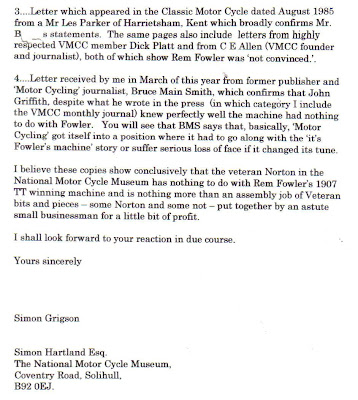 Then there is a copy of my letter of July 2008 to the NMM (above), with which all the above copies and many more, were sent. 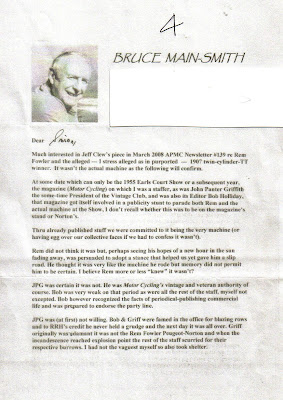 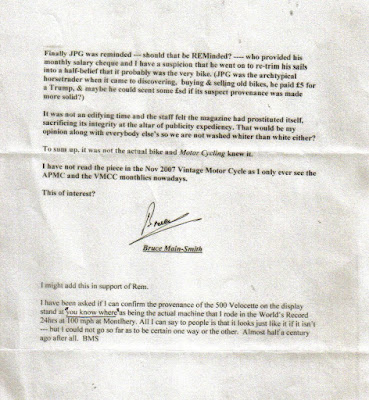 And finally there is a note from Bruce Main Smith - a colleague of John Griffith on the 'Motor Cycling' staff - which confirmed that Griffith knew full well the bike was nothing to do with Rem Fowler. This, too, was sent to the NMM.


By August 2008 I had had no reply from the NMM so sent a polite reminder. This was acknowledged and receipt of my letter and copies was confirmed. I was assured that the matter would be looked into as a matter of high priority. The weeks rolled by and eventually, after a wait of over twelve months, I sent a somewhat sarcastic reminder and the email argument already mentioned began, which at one point included a thinly veiled threat of legal action! However it culminated in statements from the NMM that the machine shown in the museum as the Fowler Norton IS THE REAL THING, that I was confused between the Fowler bike and another early Norton owned by the Museum and that the documentary evidence provided by me in fact ALL related to this 'other' machine.....

There is an old saying that, when you're knocking your head against a brick wall, it's nice to stop: I did!

Howard in Australia has been in touch to say that he wrote to the NMM about the machine but received no reply. He goes on to say that Peugeot made a couple of different engine types at the time, one of which was their 'proprietary' engine and was supplied to other motor cycle manufacturers, such as Nortons. This apparently did not have the three bolt rear engine mounting incorporated in the new crankcase castings used in Cohen's post-fire rebuild. He advises that the same incorrect crankcase castings were also used in the DOT Owners Club reproduction of the 1908 TT winning DOT.' 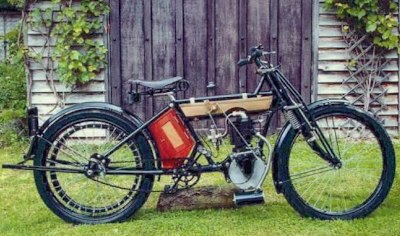 Mike from Wales, a long term pre WW1 Norton devotee, has drawn our attention to the 1909-ish Chater Lea so well illustrated on the British Only web site and depicted above. The frame has an astonishing similarity to that used in the Fowler recreation. In fact, visually, it looks nearly identical. If it is, the question arises: is the frame used by Percy Webb actually not even a Norton product but a Chater Lea?

Roger: "I am not convinced that the frame of the Rem replica is a Chater Lea. Although the frames do look very similar there is a significant difference in the bracing of the steering head. As Chater Lea supplied lug castings to the industry I would not be surprised to find virtually identical structures in the Norton of the same period. My great uncle set up a company in 1907 to make frames and his brochure of around 1909 states that he can build custom frames but more significantly offered to update the frames of earlier machines to take the slimmer tank. None of this makes the Rem machine any more authentic as the differences between the frame shown in the contemporary pictures of it in 1907 could not have been modified to the shape of the replica." 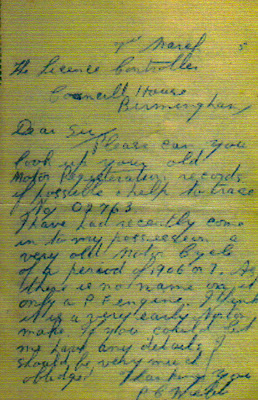 Simon:"Here is a scan (above) of the carbon copy of the letter Percy sent to Birmingham regarding the registration number.  The letter reads  (spelling unchanged):

Dear Sir
Please can you look up your old Motor Registeration records if possible and help to trace no/ O2763.

I have recently come into my possession a very old Motor Cycle of a period 1906 or 7. As thear is no name on it only a PF engine.  I think it is a very early Norton make.  If you could let me have any details I should be very much oblidged.


As can be seen from this, Percy actually had no proof the frame he had acquired was Norton and, of course, he obtained the engine from a different source to the frame. Doubtless the helpful civil servants in Birmingham gave him all the detail he needed to give his creation an aura of authenticity. 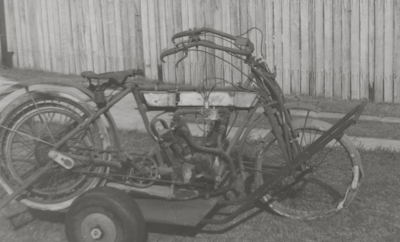 Steve in New Zealand: "George in Tasmania has a Chater Lea with a twin JAP engine in it (pic above from Flickr-Georgedulcots).  It is interesting to compare the photo of the burnt out "Rem Fowler" machine, with the Chater Lea frames, both the above twin and the single shown on your site. The following points should be noted with the so called "Rem's Machine"  Where the back stays connect to the top frame tube, compare  with the twin cylinder frame in Tasmania, which also has a horizontal saddle mounting, as the original 1907 Norton.  Note the single cylinder Chater -Lea has a more conventional saddle post mounting and some jiggery pokery would be needed to get the horizontal seat mounting. Pa Norton would have turning in his grave to see such a concoction of two lugs side by side with the back stays not bolted directly to the down tube of the main frame diamond, not what you would call best engineering practice!    Also looking at the angles of the rear stays  and the chain stays are virtually identical to that of the so called "Rem's Machine" to the single , but on the twin the back stays are at a slightly steeper angle but not as steep as on the original 1907 Norton.  The distance at the bottom of the frame diamond either side of the engine is  twin the longer on the twin than on than on the  single but compare the distance between both the Chater-Lea frames with the 1907 Norton. The position of the the pedal crank has been mentioned but compare both relative to the crankcase on the so called "Rem's machine"  That of the twin frame the crank is much closer to the crankcase and the triangle formed by the diagonal brace is much smaller than the single, which would seem to confirm that "Rem's machine" was based on an old single cylinder Chater-Lea frame suitably doctored. Also compare the height of the crankcase on "Rem's machine" relative to the bottom bracket/crank  on the 1907 original.


The headstock on the "Rem machine" bears little relation to the 1907 original, comparing the two, the gap difference between the cross bars is obvious, the distance between the junction of the front downtube and the lower "top tube" and that of the front downtube with the headstock  means the tank depth on "Rem's Machine" is much less, compared to the 1907 machine. Also note the difference in height of the top of the steering head above the top tube, it was easy to chop out the headstock brace, but interestingly, looking at the the photo of the burnt out wreck there looks to be some sort of possible repair/modification to the headstock." 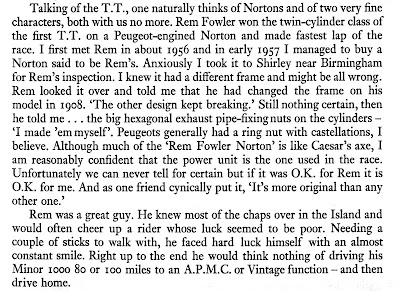 Roger: "The clipping above comes from an article written by John Griffiths. It was originally published in Motorcycle Sport but I fond it in LJK Setright's excellent book Twistgrip. Looking at the pictures of the engine in 1907 and the exhaust pipe fittings it is clear that the original fittings were not castellations but a ring with holes for a C-spanner.  Looking at the pictures of Will Cooke's NLG at Brooklands the same year his Peugeot engine was fitted with hexagonal fittings similar to those on the Fowler engine. Presumably this was done to allow the adjustable spanner carried by all riders to be used rather than carry an extra C-spanner. It would appear that even the pipe fittings were not a good indication that it was an engine that had anything to do with Rem. The recent pictures of the engine (2007 Goodwood) show that the hexagonal fittings no longer have the holes for the C-spanner. looking at the pre-restoration pictures this was also the case so it was true even before the fire. What a pity that the last link with Caeser's axe disappeared some time ago."
Newer Post Older Post Home