Various authors of Norton books and articles in recent years have remarked on the lack of success of the works CS1s in '28 and '29 compared to 1927. Vague references have been made to cylinder head problems and one chap even went so far as to suggest Walter Moore deliberately engineered the difficulties so that he could justify his departure to NSU in 1929 (a highly fanciful notion to which I do not subscribe!). It should be stressed that these problems are not associated with production versions of the Moore CS1, which were generally accepted as being fit for the purpose for which they were sold. So where did these stories start? Seemingly with none other than Joe Craig!
At the invitation of journalist, former TT winner and publisher of the TT Special Geoff Davison, Joe contributed an article to Davison's 1948 anthology 'The TT Races - behind the scenes.' In it - after several pages of introductory woffle - we come to the nub of the matter. As Joe put it, '...the main troubles of the engines of 1928 and 1929 emanated from a marked tendency of the cylinder head and piston to attain a temperature out of all proportion with the power output...' In the Isle of Man, if one got as far as Ramsey in one piece, climbing the Mountain at high revs in second gear would as often as not result in piston seizure. It seems that Moore's efforts to solve the problem were centred on the piston, which was given increased clearances but to no avail. In Joe's view it was just getting far too hot and expanding accordingly. The source of the problem was poor scavenging and combustion. What apparently happened, after the 1927 season, was an extensive re-design of the head and it seems that those responsible (no names are given!) had not realised the critical influence on performance of the inlet port shape. Norton's engineers, in an effort to follow the valve spring manufacturers' recommendations for improved reliability by using longer springs, had simply altered the head casting, making that section which supports the springs protrude rather more into the ports than was desirable for a racing engine.
On his return to Nortons in the late summer of 1929, Craig and Carroll had a good look at the problem and having identified it, went back to the original 1927 port shape - and one assumes - valve spring length. The valve springs were given a slightly easier life by a rather gentler cam and the result was there for all to see - second and third places in the 1929 Ulster Grand Prix, run at a higher speed than ever before. The lessons learned were applied to the Carroll engines which followed in 1930 and the rest, as they say, is history....... 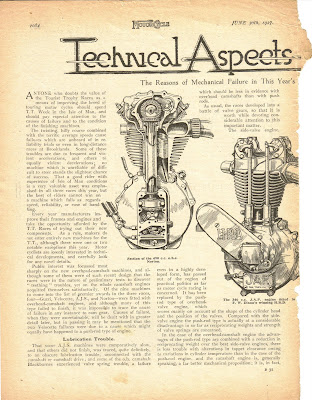 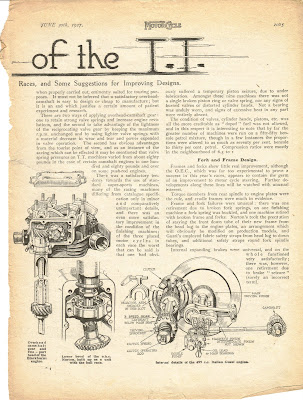 I have never seen one of the original 1927 works CS1 heads despite years of asking round and of course, the problem is that present owners of such heads might not realise what they had unless they had amassed enough CS1 heads to notice a difference. I even checked the CS1 engine in the Science Museum in London in the forlorn hope that it might have been one of the original type but no luck there either: it seems to be a standard production unit. So if there is any CS1 owner out there who thinks he (or she) has a different cylinder head to the usual type, let's be hearing from you!
(postscript: There are few photos of the '27 works engines which differed from the production versions in a few respects - quite apart from the cylinder heads. The timing cover was a different shape and was in two pieces rather than a single casting, the lower part covering the oil pump was as on the '26 TT OHV engines. The technical artist Francis Simpson did two drawings of the TT engine which appeared in the TT Notes and News (the Motor Cycle, June 30th 1927), above)
Newer Post Older Post Home